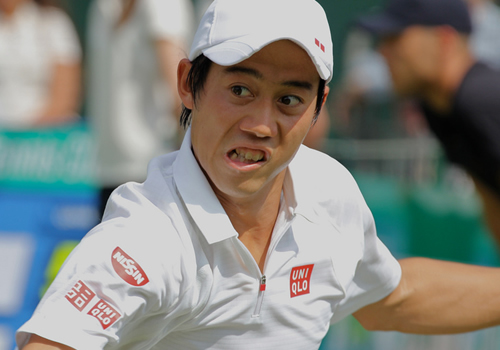 The semi-finals in a blustery Barcelona certainly didn’t produce the line-up that most might have anticipated at the start of the tournament.

For a start, the only Spaniard among the four was neither the world No1 and eight-time champion Rafael Nadal, nor world No5 David Ferrer, and not even the only other two active players on the tour who had won this prestigious tournament before, Fernando Verdasco or Tommy Robredo.

Instead, it was the man who lost last year’s final to Nadal, Nicolas Almagro, who stormed to his first ever victory over the same compatriot in the quarter-finals.

He would play the No65-ranked Colombian Santiago Giraldo, who had survived the third seed Fabio Fognini and then 10th seed Philipp Kohlschreiber—both by retirement. And it was hard to see him upsetting the one-sided head-to-head of 5-0 against the shot-making confidence of Almagro whose 12 titles and nine more finals had all come on clay. Giraldo had not won a title of any kind.

The other semi-final, though, was altogether harder to call and promised much. It featured the first meeting between two men who have threatened to hit the big time for a few years, Kei Nishikori and Ernests Gulbis. However, with four and five titles respectively, neither had won on clay and their one title apiece this year had been won indoors. But then that fitted their profiles as shot-making, attacking players.

The two were currently separated by just six places in the rankings, with the Japanese at 17 and the Latvian at 23—though both had been higher.

Nishikori’s career-high No11 last summer was knocked by injury problems, but the young 5ft 10in player, now under the guidance of former Grand Slam champion Michael Chang, had already won the Memphis title in February before beating both Ferrer and Roger Federer in Miami. And he deployed his elegant but explosive game to great effect in beating Marin Cilic in the quarters, 6-1, 6-3, in just 71 minutes.

Gulbis, altogether taller and rangier in style, showed his flamboyant talent at an early age to rise to 24 almost four years ago. At the Rome Masters in 2010, he took out Federer and won the first set against Nadal in the semis.

But lack of application and concentration ate into his results and rankings until a newly committed Gulbis began to emerge last year to win two titles. This year, he continued to advance with victories over Juan Martin del Potro in a semi run in Rotterdam and wins over Richard Gasquet and Jo-Wilfried Tsonga in Marseille, and reached a career-high 18 in February.

He looked in top form when he opened serve here, too, showing his full range of skills for a love hold: A winning serve, a cracking backhand, and a drop-shot winner.

After two games, he had dropped only one point on serve, but Nishkori looked the calmest person in Barcelona: He levelled with a love hold at 2-2, and swiftly applied the pressure to draw errors and a break point in the next game. A forehand long from Gulbis, and the Japanese broke, holding easily for a 4-2 lead.

Nishikori was continuing precisely where he left off against Cilic, and Gulbis looked just as non-plussed, unsure where he could place the ball that wouldn’t come back fast, flat and furious.

As if to prove the point, Nishikori returned every serve with interest, and if a rally did develop, he kept Gulbis on a piece of string. He broke to love and then served out the set to love, 6-2, in a mere 26 minutes.

The Japanese man’s stats were as composed as the man, with a modest five outright winners balanced by only three errors, and he had dropped just three points on serve.

Nishikori remained relentless in the second set, too, hitting the sidelines with pinpoint accuracy. Again it was Gulbis who came under pressure first, in the third game. Nishikori earned a break point in a brilliant exchange that he finished with a high backhand volley winner. He could not convert it, but pressed even harder in the fifth game. Gulbis survived four break points but had already asked for the trainer and now took a medical time out—though it was unclear if the problem was his back or leg.

They stayed on even terms through to 4-4, but Nishikori made no mistake when offered another chance in the ninth game and broke. He wavered for the first time in the match with two nervy double faults, but finally served out the match, 6-4.

The Japanese man will be hard to beat, such is the speed, balance and accuracy of his shot-making. Indeed it is hard to find a fault in his game: His serve is surprisingly good for a relatively short man, he has great touch on drop shot and slice, and has a smart tactical brain into the bargain.

Yet he may perhaps be surprised to find not Almagro in the final but an impressive Giraldo, who showed real determination in resisting the Spaniard. He broke to take a tight first set, 7-5, but Almagro seemed on the verge of wrenching back control when he broke early in the second set, only to concede the break straight back.

Giraldo then broke again as Almagro’s tally of errors climbed. The Spaniard seemed unable to find the aggression that punched holes in Nadal’s game in the quarters, retreating behind the baseline too much and too often. Even on break point in the concluding game, he played conservatively, waiting for a Giraldo error that did not come, and the Colombian sealed only his second ever final, 6-3.

The concluding match could be an intriguing one, for Giraldo’s only meeting with Nishikori on clay came at Roland Garros four years ago—and the Japanese man came back from two sets down to win the third in a tie-break and subsequently the match. The Colombian also managed a straight-sets win over Nishikori in Indian Wells in 2012.

The form and self-belief of Nishikori should carry him to the title—but then the same was true of Almagro.