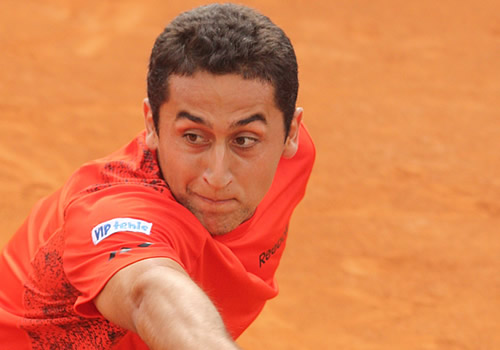 Only once in almost a decade has the famous tournament at the historic Real Club de Tenis Barcelona been without its most illustrious champion, Rafael Nadal.

And for the Barcelona Open, being played for the 62nd time this week, that could not be more fitting. Because for the world No1, this is as close to home as it gets on the ATP tour, and he could not have been a more loyal or successful figurehead for the prestigious 500 tournament.

Only in 2010, one of the remarkable Spaniard’s most successful years—three Grand Slams, on three different surfaces—did he stay away. But what has made Nadal’s involvement so special has been his performance.

Only once since he turned professional had he lost a match in the tournament: He was just 16, ranked 96, and won the first set before falling in three to Alex Corretja. Now with eight consecutive titles, he had won 41 matches in a row to once again reach the quarter-finals. And in that entire streak, he had dropped only three sets.

It would therefore, by any measure, take a brave person to bet against him winning a record ninth title—and the odds got a whole lot worse when the only other top-12 player in the draw, David Ferrer, lost in his first match.

Then the highest ranked man in Nadal’s half, No13 Fabio Fognini—one of the form men of the season with 23 match-wins—failed to win a game before retiring in his opening match.

Nadal’s quarter-final, though, was against a fellow Spaniard with his own great clay credentials. All 12 of 28-year-old Nicolas Almagro’s titles had come on clay, as had all nine of his other finals—including Barcelona last year. But after more than three months off the tour with injury, his ranking had slipped.

Only last week, in Monte Carlo, he withdrew with a foot problem ahead of his third-round match against Stan Wawrinka. And as if all that was not bad enough for Almagro, he had failed to win one match in 10 meetings with Nadal.

Yet the flashy-hitting Almagro, owner of that rare shot, a Spanish single-handed backhand, was not without some success this season, despite his misfortunes. He had reached two semis on clay in South America and, earlier this month, made the finals of Houston.

Perhaps, too, he had looked to another Spaniard for inspiration. Nadal had had a near impregnable record in Monte Carlo, too, but last week, David Ferrer handed him his first defeat short of the final, and his first defeat by Ferrer on clay, in a decade.

Neither man, though, hit their stride immediately. The first four games saw a break of serve on each side, but in the fifth, Nadal broke again for a 4-2 lead and surged to the first set with another break, 6-2. Almagro, who can play thrilling, attacking, but often frustratingly inconsistent tennis, showed again that he can make winners but also too many errors: 15 of them already.

In the second set, too, Nadal seemed to be the man in control, and held serve much the easier. Indeed Almagro’s serving, usually an impressive weapon, looked destined to be his downfall with less than 50 percent of his first deliveries hitting the mark. He faced five break points, but the Nadal error count was rising and he could not convert any of them.

By now, with every game that passed, Almagro looked more determined, and a clutch of confident strikes in the tie-break—both forehands and backhands—not only had the packed arena on its feet but had the second set in the bag, 7-6(5). It had taken more than two hours, but Nadal had dropped his first Barcelona set since the final of 2008.

Almagro roared his supporters on, looking increasingly like a man on a mission—but would his emotions get the better of him, as they had done many times before? It looked that way when he was broken to love in the fourth game, courtesy of four over-enthusiastic hits.

However, in an extraordinary turn of events, the usually faultless Nadal conceded the break back straight away with a double fault, and that visibly boosted Almagro. He unleashed his aggressive, flat ground-strokes for a love hold, and punished a wavering Nadal—who opened with another double fault—to break at the second time of asking.

Still the two were not done, and fans of Almagro no doubt anticipated him seizing defeat from the jaws of victory when he handed the break back, 4-4.

But this time, they misjudged. With Nadal making uncharacteristic errors and Almagro going for his shots like the top-10 player he has been, the defending champion was broken to love. Nadal had one more chance to break back, but Almagro threw in his first serve-and-volley of the match, a serve winner and a crushing forehand to take set and match, 6-4.

Almagro’s victory came courtesy of an unwavering game plan of brave, aggressive tennis: 36 winners, certainly, but also 47 errors. Yet it clearly dented the rhythm of Nadal and will no doubt dent his confidence still further after losing to Ferrer in Monte Carlo. And that is not the ideal way to begin his defence of the three remaining big events of the clay season in Madrid, Rome and Paris.

With the biggest win of Almagro’s long career under his belt, he must now be optimistic about reaching the final: He meets the 65-ranked Santiago Giraldo.

The bottom half of the Barcelona draw, minus Ferrer and No5 seed Tommy Robredo, was packed with plenty of fresh blood and big hitters.

Marin Cilic, third only to Nadal and Roger Federer in match-wins this year, had picked up two hard-court titles in Zagreb and Delray Beach and was impressive indoors in Rotterdam with wins over Andy Murray and Jo-Wilfried Tsonga.

But he could not hold off some charismatic tennis from the all-court talent of No17 Kei Nishikori, whose career-high No11 last summer was knocked by injury problems. But the young Japanese, an elegant but explosive hitter, won the Memphis title in February and then beat both Ferrer and Federer in Miami. And he came out with guns blazing to storm past Cilic, 6-1, 6-3, in just 71 minutes.

That set up what promises to be one of the matches of the tournament, a first meeting with another flamboyant talent, Ernests Gulbis. The Latvian, who hit a career-high No18 by winning the Marseille title and reaching the Rotterdam semis in February, stormed past Teymuraz Gabashvili, 6-1, 6-4, in 89 minutes.

If he and Nishikori both play to their Barcelona form, it should be a match to relish.