Chinese Grand Prix 2014: Four talking points ahead of the race 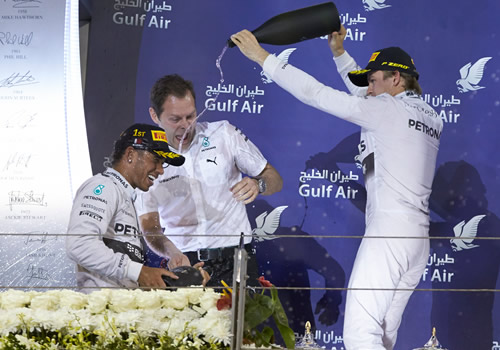 Who’s going to be in the winning Mercedes this time around?

We can all pretty much agree that unless something outside of their control happens, it’s likely to be one of the Mercedes drivers on the top step come Sunday. After the safety car period in Bahrain, when the team finally showed just how far ahead they really are from the rest of the field in terms of raw pace, and both drivers have previous in China, Hamilton having won twice and Rosberg taking his breakthrough win back in 2012 – the only question is which one? Mercedes have insisted that they will continue to allow their drivers to battle it out, within reason, and indeed even force them to share data, an issue that Hamilton pointed out back in Bahrain had helped Rosberg out after he’d studied the other side of the garage’s info. Fans will be hoping that the team continues this policy for as long as possible as it’s proving to be brilliant for the sport.

Change at the top for Ferrari

News came out this week that Stefano Domenicali has stepped down as Ferrari team boss with immediate effect, being replaced in the interim by the relatively unknown (outside of Ferrari circles anyway) Marco Mattiacci. Ferrari have been going through a crisis in recent years and this announcement was probably going to be coming sooner or later anyway. Although they had won a constructors’ title under his tenure, way back in 2008, they haven’t won a drivers’ crown since Kimi Raikkonen in 2007 and have been far too hit and miss for a while now. Who’d honestly have predicted back in 2010, when Alonso joined that four years later, that he’d still only be a double world champion? Not that the situation Ferrari find themselves in could ever be seen as solely the fault of Domenicali – he was in charge and the frankly awful start to this season just happens to have been the final nail in the coffin. Although is this likely to improve results in the short term? Unlikely.

Are Williams going to start delivering?

Everyone’s favourite underachieving, sleeping giant of a team must to start capitalising on their early promise this season. It’s been too long in the waiting for Williams to be competitive again and after some points paying finishes that in terms of the last few years look very good (exceedingly good in comparison to last year’s truly awful campaign), they really need to start doing, and should have done, better. A couple of seventh and eighth places in the last two races really doesn’t do them justice and if they don’t start finishing higher up soon they’re going to find themselves too far behind the other Mercedes powered team’s when the serious upgrades start kicking in. Come on Williams, there’s an awful lot of F1 fans desperate to see at least a podium for you.

Daniel Ricciardo’s exclusion from the Australian Grand Prix was upheld after the FIA insisted that Red Bull had broken the technical regulation on fuel flow after deciding, despite being advised not to, to rely on their own sensor data rather than the FIA’s approved one which they believed was giving incorrect readings. We can all agree that the Red Bull is fundamentally a good car and after continuing to improve last time around, Ricciardo himself in particular, those 18 lost points could be very costly come the end of the season.