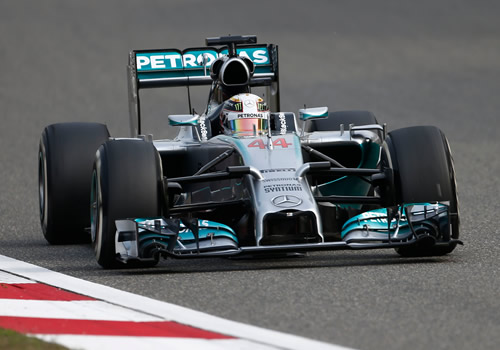 Lewis Hamilton took his third pole position in four races this season in qualifying at the Chinese Grand Prix.

The Mercedes driver was more than half a second clear of Red Bull’s Daniel Ricciardo in wet conditions at the Shanghai International Circuit.

It was a tough session, but the car was feeling great

Red Bull’s Sebastian Vettel will start from third as Nico Rosberg ended up fourth after spinning his Mercedes in an attempt to close the gap to his team-mate.

“Definitely the most satisfaction is getting this result when it is raining,” said Hamilton.

“It was so slippery out there, trying to find the grip and not make mistakes.

“It was a tough session, but the car was feeling great. There are some things that can be improved on but it has put us in a good position for the race.”

Hamilton’s 34th career pole position moves him one clear of Jim Clark and fourth in the all-time list behind Michael Schumacher, Ayrton Senna and Vettel.

“In these conditions it’s very tricky for us,” said Button. “We struggle with front [tyre] temperatures.

“I think it will be a fun race, it’s further back than we would like but there have been some pretty good results from this far back this season.”