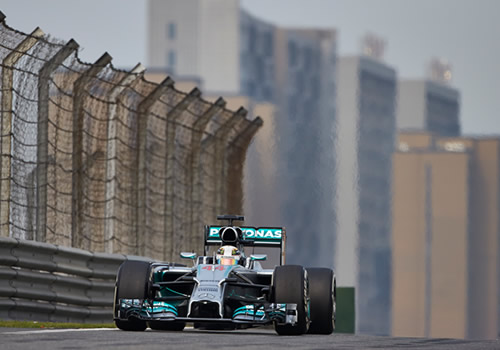 The win closes his deficit to Rosberg at the head of the drivers’ championship to just four points.

“The fans have been incredible this week and they gave me lots of energy,” said Hamilton, who has won every grand prix since retiring at the season-opening race in Australia.

“All the hard work from the team has paid off and I just can’t believe how amazing the car is and it’s testament how hard everyone’s been working.

“I am really happy Nico is up here with us too it’s great rewards for the team.

“This team is on a roll they have done a great job, we aim to keep moving forward and improving and I hope it can continue.”

It is the first time that Hamilton has sealed three straight wins in his Formula 1 career, and the result means Mercedes has won all four of the opening grands prix of the season

Rosberg was second ahead of Ferrari’s Fernando Alonso, who held off Red Bull’s Daniel Ricciardo. Sebastian Vettel was fifth.

“It was a good weekend we did improve the car a bit and to be on the podium is a nice surprise for us,” said Alonso.

“I think I am third in the drivers’ championship behind Nico Rosberg and Lewis Hamilton and we didn’t have the start to the season we wanted so to be here is fantastic.”