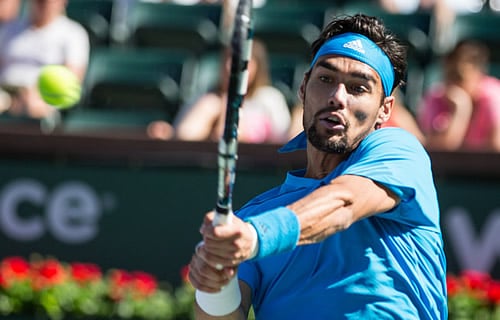 As the British team prepared for the final day of competition against Italy on the clay of Naples, there was a real air of optimism among team and fans.

Andy Murray had contended with the weather, a tough schedule and illness in front of a boisterous away crowd, and all on the surface that he finds the most challenging. What’s more, his only matches this year on the red dirt had come in the first round of Davis Cup competition in the United States.

Yet having missed the pre-draw press conference to nurse a stomach virus, Murray came through an opening singles rubber played over two days before joining forces a couple of hours later with friend Colin Fleming to win the doubles rubber. That took Team GB to a 2-1 lead over Italy, and Murray’s run of Davis Cup singles wins to 20 out of 21.

If Murray could make it three wins out of three, Great Britain would be into the semi-finals for the first time in 33 years. But Italy had taken the spoils in 10 of the last 11 encounters, including the most recent match in Telford in 1984. And Murray took on a man whose clay credentials were formidable, the No13-ranked Fabio Fognini.

The two men were born just two weeks apart, but Fognini proved to be a later developer than Murray. Only in the last couple of years had the Italian reached the upper ranks, and his form this year was outstanding.

Already he had 19 wins compared with Murray’s 17, but his run on clay was up to 24 wins in his last 26 matches. In February, he won in Vina del Mar and was runner-up in Buenos Aires: Indeed he had reached the final of five of his last sixt clay court events.

Murray got off to the best of starts, though, against a very tense Fognini: He broke, and then held through a long, probing, 10-minute game and two break points for 2-0.

But gradually the quality on both sides rose, particularly on the Italian side. The crowd was vociferous, with plenty of needle directed at both players. First Fognini complained to the umpire, then Murray did the same, but the flamboyant Italian began to use it to his advantage, broke Murray to love to level at 3-3, and continued his run to nine straight points via some quite exhilarating shot-making, and several sequences of winning drop-shots and forehands.

The purple patch brought another break for Fognini, and he served out the set, 6-3. He had made 13 winners to Murray’s seven, and the quality did not let up.

After an hour and half of tense, elongated and varied tennis, Fognini deployed more remarkable drops and angles to break, held with a second-serve ace and broke again as Murray succumbed to raucous cheering from the crowd with a double fault: 6-3.

The third set edged to 4-4 without a single break point, though Murray looked increasingly weary through punishing baseline tennis interspersed with drop-shots and lob chases. Fognini held serve with one of the rallies of the match—a drop pick-up followed by an acute cross-court touch winner—and a weak service game gave the Italian just the opening he needed to break for the set and match, 6-4.

This was just Murray’s second singles loss in Davis Cup—and no shame in that against such a fine exponent on clay. No shame in losing the first one, either, as it came, in a strange quirk of fate, when he was just 18, also on clay, to a man named Stan Wawrinka. It was in Switzerland in 2005, when the GB team suffered a 5-0 whitewash.

Had Murray won, he could have set up the first meeting between the two nations again—although Wawrinka, now also a Grand Slam champion, was yet to win a rubber in Geneva.

As it was, Team GB would look to the No161-ranked James Ward to beat No34 Andreas Seppi. And on previous experience, it was not out of the question.

Ward had twice played a vital role in helping GB to reach this stage. He scored a five-set win over Dimitry Tursunov to help the team back from 0-2 down against Russia last April. He then came back from two sets to one down against Sam Querrey in San Diego this February. It was worth noting, too, that Seppi had won only four matches so far this year, slipping from a ranking of 18 a year ago.

For a time in the first set, it looked as though Ward might rise to the challenge again in the face of a Seppi who looked very tense. It was the Italian who broke first in the second game, but Ward retaliated immediately. They exchanged breaks again mid-set and once again in the eighth and ninth games. Then the rain interrupted proceedings—but not the sequence of breaks. Seppi broke Ward again for the first set, 6-4.

It took only one break in the second set, and that went to a more comfortable-looking Seppi in the sixth game. He held to love to take the set, 6-3.

The Italian began to run away with the match in the third set, breaking twice to take a 4-1 lead, but then the curse of Davis Cup took hold: nerves. Seppi was on the verge of taking Italy to their first semi-final since 1998, but he let Ward back in with a break back.

That, however, proved to be the last glimmer of hope. Seppi made no mistake in serving out the match, 6-4, to the rapturous cheers of the home support.

So Murray does not, this time, lay to rest his third Fred Perry record. He may have been the first Briton since Perry to win a Grand Slam—at the US Open—and then Wimbledon, but the Perry-led GB dominance of the 1930s remains the Davis Cup benchmark.

Just as Italy was completing its comeback from 2-1 down in Naples, Switzerland was beginning its own revival in Geneva. Wawrinka played his part first to beat the No1 Kazakhstan player, Mikhail Kukushkin, leaving Roger Federer to play his first deciding rubber in Davis Cup in 24 ties. The Swiss sealed a 7-6(0) 6-2 6-3 win over Andrey Golubev to see his country through to the World Group semi-finals.