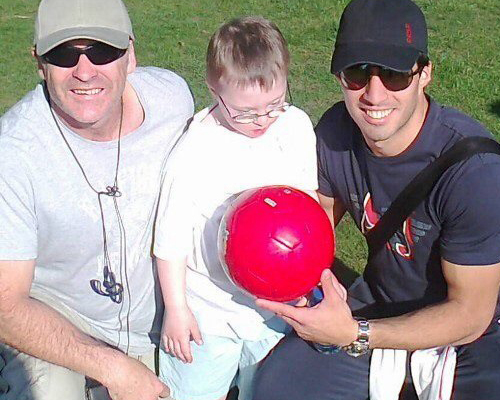 Luis Suarez has shown his softer side after the Liverpool striker stopped to play football with a young boy who has Down’s syndrome.

A picture of the Uruguayan with the seven-year-old and his father in Liverpool was uploaded to popular social media website reddit.com by the boy’s Uncle this week.

The uploader, whose username is benjibean, revealed that Suarez had run over to play football with the boy, with his dad initially unaware that it was the 27-year-old Liverpool forward.

Benjibean added that the incident occurred after the South American had landed himself in further trouble after biting Branislav Ivanovic in a 2-2 draw with Chelsea in April 2013.

“Initially he just ran over and took the ball of my cousin,” the boy’s uncle said on reddit.com.

“My uncle (pictured) didn’t realise it was Suarez initially and thought it was just some annoying man.

“Luis was interacting with my cousin and letting him nutmeg him. Yes that’s right, my seven year old cousin has nut-megged Suarez.

“Obviously my uncles was mind blown once he realised it was Suarez and asked for the picture.”

He added: “Now my cousin when he grows up has a picture with one of the best Liverpool players to grace Anfield.

“So thanks Suarez. What a guy you are. This was around all the Evra/ivanovic drama, and made my believe he has a true compassion.”

Suarez has managed to stay out of trouble this season, scoring 29 Premier League goals to leave Liverpool in pole position in the title race.