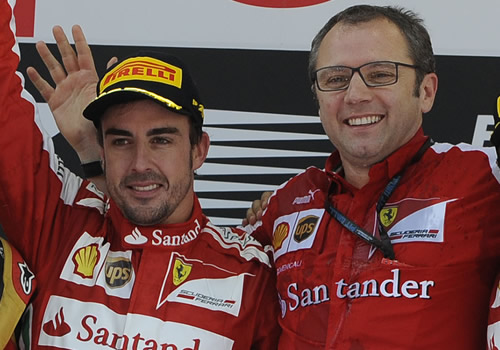 Stefano Domenicali had been in charge at Ferrari since 2008 Photo: Ferrari

Stefano Domenicali has resigned as team principal of Ferrari with immediate effect.

Domenicali, 48, had been in charge since replacing Jean Todt in 2008 and will be replaced by Marco Mattiacci.

In what has been a disappointing start to the 2014 season, Ferrari have struggled once again to match the pace of Red Bull and Mercedes, with neither Fernando Alonso nor Kimi Raikkonen registering a podium over the first three races.

I hope that very soon, Ferrari will be back where it deserves to be

“There are particular moments in all of our professional lives where you need the courage to take difficult and very painful decisions,” said Domenicali.

“It’s time to make an important change. As boss, I take the responsibility – as I always have – for the situation we are going through.

“This decision has been taken with the aim of doing something to shake things up and for the good of this group of people that I feel very close to.

“With all my heart, I thank all the men and women in the team, the drivers and the partners for the wonderful relationship we have enjoyed over all these years.”

“I hope that very soon, Ferrari will be back where it deserves to be.”

“My final words of thanks go to our president, for having always supported me and to all our fans. I only regret that we have been unable to harvest what we worked so hard to sow in recent years.”

Ferrari has not won a title since 2008. The Italian team has struggled to compete with Red Bull for the past four seasons and desperately needed a strong start to the 2014 season – but it seems like the new rules and regulations have hampered their progress.

Instead, Mercedes and the three teams powered by Mercedes engines have gone on to shine in the early part of the season.

He said: “I thank Stefano, not only for his constant dedication and effort, but also for the great sense of responsibility he has shown, even today, in always putting the interests of Ferrari above all else.”

“I also want to wish all the best to Marco Mattiacci, whom I know to be a highly regarded manager and who knows the company well. He has accepted this challenge with enthusiasm.”