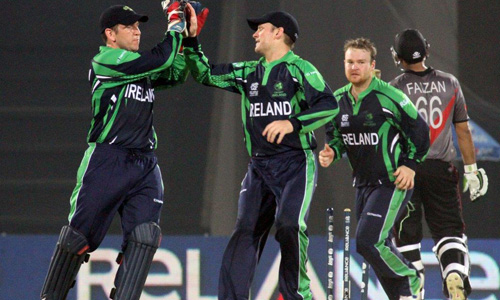 Mark Ramprakash says he has been very impressed with the rich cricketing talent that has emerged from Ireland in recent years.

Ed Joyce and Eoin Morgan are just two of the big names who have enjoyed success after making the switch to represent England in all formats of the game.

It isn’t easy for Ireland to hold onto those players, someone like Boyd Rankin. If you picked a full strength Irish side it would give anyone game

Dublin-born Joyce has opted to represent Ireland again after falling out of favour with the ECB selectors, and the batsman was part of the Irish side that made a premature World Twenty20 exit in March.

Despite a mixed showing in Bangladesh, former England batsman Ramprakash feels the current Irish side are capable of giving any of the best sides a tough examination.

“I’ve been very impressed with the way Ireland have developed over the years, probably going back the last 15 years,” Ramprakash told The Sport Review, speaking on behalf of ESPNcricinfo.com.

“I’ve been very impressed with the talent that has come out of Ireland. Top players like Ed Joyce, Eoin Morgan and other players, like Gary Wilson, the O’Briens, Paul Stirling.

“We have young Irishman Andy Balbirnie he’s impressed me already this season. I think that is great.

“It isn’t easy for Ireland to hold onto those players, someone like Boyd Rankin. If you picked a full strength Irish side it would give anyone game.”

While Ramprakash feels that the Irish have the batting talent to compete at the top, the former Surrey man isn’t sure whether they have the bowling depth to survive at Test cricket’s top table.

“Well it is a tricky issue isn’t it?” he said. “I’ve mentioned quite a few batsmen but in the bowling department… to bowl in T2O or ODI game is one thing but to bowl in Test cricket is another thing.

“How many Irish bowlers are coming through? That would be a concern. To play a five-day game, Boyd Rankin is clearly a special bowler, but how many other bowlers have come through to have first-class careers?

“That would be a good question for Ireand as to whether they’re capable at Test level with the West Indies and Bangladesh.”