Masters 2014: Vicious ice storms destroyed one of Augusta's favourite trees last winter and Scotland could help them get it back 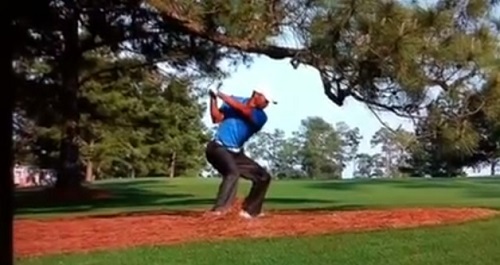 Dalmeny Golf Club in Edinburgh hopes to help Augusta National replace the historic Eisenhower tree that was removed from the course following storms earlier this year.

Vicious ice storms tore through Augusta in February, damaging the tree beyond repair and leaving the 17th looking rather bare.

It would appear hope is not lost however, as Dalmeny have an oak tree that was planted by President Eisenhower in 1946 when he given freedom of the city.

They have taken cuttings of the tree and sent them to Augusta, and Club Secretary Wullie Ruffle hopes the new tree could be planted later this year.

“We hope that they do accept our offer to plant it on their course for generations of golf fans the world over to appreciate,” Mr Ruffle told Sky Sports News.

The course looks very different ahead of the Masters as the 17th is missing the historic tree which has caused so many great players problems over the years.

Former President Dwight D. Eisenhower despised the tree so much when he played the course that he campaigned for its removal – so the tree was named after him.

It hung over the 17th fairway and made a good view of the hole almost impossible.

Tiger Woods was famously injured in 2011 when attempting to play a shot under the hanging branches of the Eisenhower Tree.

Many players this year admit that the removal of the tree is sad in terms of history, but that it makes playing much easier.

“I hit that darn thing probably twice a week so my game’s not going to miss it but I know there’s some history that will,” Jim Furyk said.

Reigning Masters champion Adam Scott said: “Purely from a playing point of view I think it’s friendlier that it’s not there and you can see a little bit more of the hole.”

Players this year will not have to contend with the Eisenhower Tree and that should make their task on the 17th much easier.

However, with the help of Dalmeny Golf Club, in years to come the 17th could once again be graced by an Eisenhower Tree.