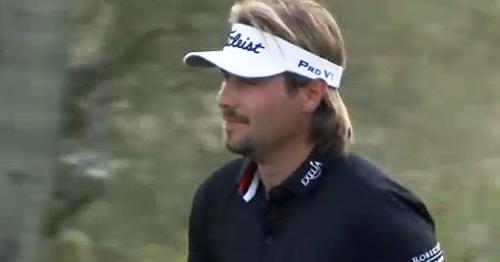 Top five Europeans to watch at the 2014 Masters as the year’s first major gets underway in Augusta on Thursday.

1. Rory McIlroy – the former world number one and two-time major winner starts the week as favourite to slip into the famous green jacket and that position has only been strengthened by the absence of Tiger Woods.

The 25-year-old has had a patchy season at best and is yet to win a tournament on either the US or European Tour, although he finished second in the Honda Classic in March.

Nevertheless his sweeping victory in the 2011 US Open and his follow-up win in the 2012 PGA Tournament means that he is considered to be a major tournament player with the temperament for the big occasion.

He will be looking to set the record straight at Augusta after his famous Masters’ melt-down in 2011 when he squandered a four-shot lead on the final day and finished tied in 15th place.

2. Justin Rose – the 33-year-old Englishman will be looking to add to his success in winning the 2013 US Open. This is his ninth crack at the Augusta course including a fifth place finish in 2007.

His form so far in an injury plagued season does not make great reading for Rose and he has failed to win a tournament since lifting the US Open at Merion in June 2013.

That could explain why bookmakers have him at 25/1 to win the title but having broken his duck with a strong display of driving at putting he will no doubt start the tournament full of confidence.

3. Henrik Stenson – the 38-year-old Swede has yet to win a major tournament but had a superb 2013 season when he finished top of the European Tour. He also won the Race to Dubai and the USA PGA Fed Ex cup – the first player ever to achieve that feat.

This will be his fifth Masters and although his best finish so far is joint 17th, his form last season will surely see him make a robust challenge to lift his first major.

4. Sergio Garcia – considered by some the best player never to have won a major, the 34-year-old Spaniard is in good form following his victory win the Qatar Masters in January and his third place in the Houston Open last week.

His best Masters finish was fourth in 2004 and Garcia’s putting is often seen as the key weakness that has prevented him bettering that record at Augusta.

First major in his sights?

5. Victor Dubuisson – the Frenchman is making his debut at Augusta this year and will no doubt be a long shot to win. Only three debutants have won the Masters but the 23-year-old is currently fourth in the European Race to Dubai standings and in good form with a strong short game.

He has missed the cut in his only previous major appearances but was second in the World Match Play in February to back up his first tour win in the Turkish Open in November last year.