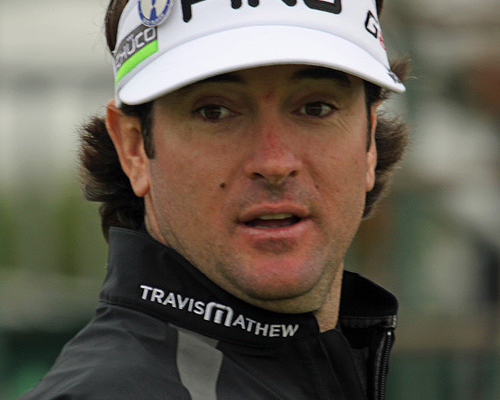 Rising star Jordan Spieth and former champion Bubba Watson will head into Sunday at the 2014 Masters with a one-shot lead after another enthralling day at Augusta left them locked together at five under par.

The younger of the two men will be the happier. While Watson, who had started the day two shots clear of the field, bogeyed the first hole and jittered his way to a 74 thereafter.

Softly-spoken Spieth was a model of consistency, with a second consecutive round of 70 to follow up a first day 71.

It is less than a year since the now 20-year-old won his first PGA tour event, but that came in a three-man play-off at the fifth extra hole, and with nerves like that, he will have high hopes of taking Tiger Woods’s crown as the youngest winner of the Masters.

Watson, on the other hand, has donned a Green Jacket before, and if he can summon up those memories, will be hard to beat.

Neither can expect to have it easy now, though, as three days of fluctuating fortunes have left 13 players under par and within four shots of each other.

Amongst them are four major champions, with Watson joined by Jim Furyk, hardy perennial Fred Couples and Justin Rose (who, if he is not to win this tournament, will rue his first seven holes on Thursday, which left him at four over par).

There is the cream of established American talent, with Matt Kuchar at four under and Rickie Fowler a shot further back.

There is also a strong European presence.

Swede Jonas Blixt is one off the lead, and is the only man in the field other than Spieth to have completed three rounds under par.

Miguel Angel Jimenez, whose early 66 edged out Fowler’s 67 as the low round of the day, is poised at three under, while Lee Westwood and Thomas Bjorn will expect to feature heavily at the business end of the tournament from two under.

Australian John Senden struggled to a 75 having started in the final group, but is still in contention at one under par, where he sits alongside Rose, Couples and Kevin Stadler.

Further down the field, meanwhile, there were mixed fortunes among the azaleas and across the glass-like greens.

Big-hitting American Gary Woodland went out in 30 to briefly sit second on the leaderboard, but could not sustain the momentum and fell back to level par for the tournament.

Alongside him is a “disgusted” Ian Poulter, who came home in 37 for a round of 70 and a share of 14th place.

There was proof that Augusta can be chastening even for its champions, as Adam Scott dropped four shots in his first five holes and crumpled to a 76. He is one over par for the tournament, and surely now out of the running.

There was Rory McIlroy, suffering the double ignominy of going out first and then being outscored by Augusta member Jeff Knox, who played alongside him to mark his card.

McIlroy did at least, however, break par, and may yet improve on his best Masters finish, a tie for 15th in 2011. And there was an 81 for Stephen Gallacher, including three straight double bogeys around the turn, which sent him tumbling from one under par to eight over.

So, then, to Sunday. 18 holes stand between one man and perhaps the most treasured prize in golf.

We may have the youngest ever winner in Spieth, the oldest in Couples, or Westwood may finally end the longest wait. Whatever the final outcome, the 78th staging of this historic event has a few more stories to tell.