Masters 2014: Harry Reardon looks at the highlights from day two in Augusta as Bubba Watson heads the field 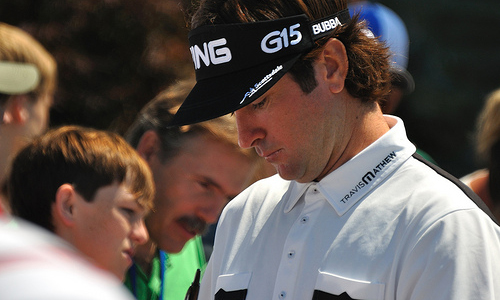 2012 winner Bubba Watson’s 68 took him into a three-shot lead on seven under par, while three time champion Phil Mickelson could only manage a 73 to slump to five over and miss the cut by a shot.

For both players, it all began at the 12th, the 155 yard Golden Bell – or as Jack Nicklaus would have it, “that lovely little devil of a hole”.

Watson was able to tame the beast, with a birdie which started a run of five in a row before a dropped shot at the last brought him back in view of the field.

Mickelson, though, found sand. Lots of it, too, with his tee shot nestling in the front bunker, his bladed second ending up in the sand at the back and his third flying back whence the previous one had come.

A 20-foot putt for a double bogey failed to drop, and his race was run.

The tournament, then, would seem to be Watson’s to lose. But if there is one thing that the Masters can usually be relied on to provide, it is drama, and with two days still to play, there is a chasing pack ready and waiting to swallow him up if the man from Bagdad falters.

John Senden, the 42-year-old Australian, who won his second PGA Tour title at the Valspar Championship in Florida last month, is three shots back after matching Watson’s round of 68.

And there, of course, is 54-year-old Freddie Couples, the 1992 winner who has finished in the top 15 of this tournament for the last four years, and who matched his first day 71 to sit in a tie for seventh, five shots back.

But while Couples, and further down the leaderboard old stagers like Bernhard Langer (+2), Miguel Angel Jimenez (+3), Jose Maria Olazabal and Sandy Lyle (both +4) were proving the value of experience, the cut claimed many a man who had come to Georgia with a reputation and with victory on his mind.

Luke Donald could not salvage the wreckage of his previous day’s 79, with a two under par round that was not quite enough to see him through to the weekend.

Victor Dubuisson, the Frenchman whose meteoric rise has taken him to Ryder Cup shoo-in and number 21 in the world, shot 75, and also missed out by a shot.

Ernie Els and Graeme McDowell will not be troubling the scorers this weekend, and nor, after bogeying 17 and 18 for the second day in a row, will be Sergio Garcia.

And what of Rory? Dear old hot and cold Rory McIlroy. Two major victories, both by a landslide, and many people’s favourite coming into this tournament, his day was summed up on 13, as a regulation approach to the green bounced off a sprinkler head on the fringe and into the azaleas.

From there, he could only muster a bogey, and with two doubles elsewhere on his card, it was only a clutch five footer on the last which kept him in the tournament at four over par. Somehow even from there, though, one could not comfortably write him off.

As the field narrows to 51, however, it is Watson who leads the way. He will not have it easy, with a fellow former champion in his wing mirrors and a bevy of gnarled veterans and precocious upstarts ready to pounce on him from behind the pines.

As ‘Moving Day’ approaches, though, Watson it is who currently holds the best piece of real estate.