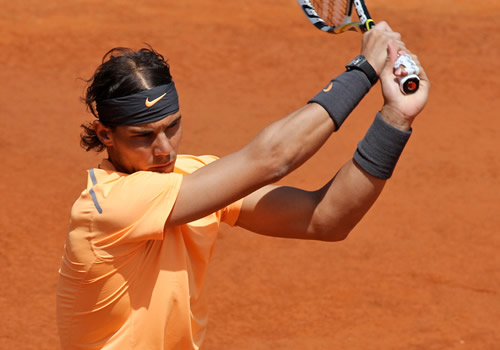 Rafael Nadal is through to the last eight in Monaco Photo: Marianne Bevis

The 56 men who had the not inconsiderable pleasure of taking to the near-perfect courts of the Monte-Carlo Country Club this week have been whittled down to eight.

For this, the first and possibly the most glamorous clay Masters of the season, the setting is idyllic. The terraced Monaco site clings to the Mediterranean coast and boasts the kind of weather and schedule that suits both fans and players—and a large number of each calls this corner of Europe that nestles between France and Italy their home.

Play starts over coffee and croissant at a civilised 10.30, just as the sun begins to warm the courts. By the third match, seats are again full—this time with lunch taken and the sun rather warmer. And should the four matches—and there are never more in the day’s schedule—even extend to a couple of hours apiece, play will is done before sunset and the call of cocktails.

Yet even this relaxed schedule has been forced to raise its eyebrows as the week heads for the still more laid-back weekend, for the top four seeds have been unusually eager to reach their allotted places in the draw. Indeed the race is now on to see if any of them can make the semi-finals in fewer than three hours of court time.

Defending champion and No2 seed Novak Djokovic was the first to take off, beating qualifier Albert Montanes in 45 minutes.

Next to race to the last 16 was No4 seed Roger Federer, who dismissed the No41-ranked Radek Stepanek in 52 minutes. After a further 72 minutes of play, top seed and eight-time champion Rafael Nadal had cruised past qualifier Teymuraz Gabashvili and then, in the shortest match of the tournament so far, No3 Stan Wawrinka scored an impressive win over the world No27, Marin Cilic, in a mere 45 minutes.

By Thursday, the sultry terracotta courts showcased all four of the top men in a single day, but none of them detained the Monte Carlo crowd for too long. Even before his scheduled 12.30 start, Wawrinka was assured of his place in the quarter-finals when his opponent, No15 seed Nicolas Almagro, withdrew with a foot injury. How that will affect Wawrinka’s big test ahead, No8 seed Milos Raonic, remains to be seen.

On Centre Court, No9 Jo-Wilfried Tsonga, celebrating his 29th birthday, took advantage of a near blow-out from No10 Fabio Fognini to seal a 6-0 third set in under two hours, for which the crowds must have been thoroughly grateful, for Nadal took little time—73 minutes—to beat Andreas Seppi, 6-1, 6-3.

It was, for the significance of the match, a speedy and untroubled victory for a man scoring his 50th win in Monte Carlo, a place where he has lost only two matches since he first played here 11 years ago. But 50 was not the only big number for the Spaniard. He also became the 11th player in the Open era to record 300 tour-level clay-court wins.

Nadal has the best winning percentage on clay, now standing at 300-21, or 93 percent, and has won 43 clay titles from 49 finals—and since 2005, he has never lost more than two clay matches in a season.

He has some way to go to equal the all-time leader on clay, Guillermo Vilas, who won 644 matches on the red dirt, but he clearly has his eyes on a record ninth title in Monaco, and will have high hopes of reaching at least the semis. He faces compatriot David Ferrer, who has beaten Nadal only once on clay—in their very first meeting in 2004. Even so, this one should delay Nadal rather longer than his previous matches.

Federer was up next, and looked initially as though he may drop behind the pace set by Djokovic and Nadal. He faced Lukas Rosol, who stormed from the starting line to break the Swiss in the third game. But Federer quickly put his foot on the pedal to break back in the seventh and again at 5-4 to score four games in a row and the first set.

Both men played at a high pace, but Federer seemed to have a reply for everything Rosol threw at him, and he broke in the fourth game after surging through a 52-second hold of serve. The Swiss lost not another game, and barely another point, to take the match, 6-1, in 57 minutes, with a tally of 24 winners to Rosol’s 10 and an aggressive 15 points out of 16 played at the net.

But just as Nadal, the task becomes harder in the quarters, where Federer meets Tsonga. The Frenchman won their last clay meeting, at Roland Garros last year, but the Swiss is here on business and in a hurry: His wife is, after all, in the advanced stages of pregnancy. It’s hard to see him losing against Tsonga, but another win in under an hour looks unlikely.

The same cannot be said of Djokovic, though. His 47-minute win over Lucky Loser Pablo Carreno Busta ensured he kept ahead of Nadal and Federer both in time on court and also in games lost. Thus far, he has dropped only one game in each of his two matches, and in today’s, he hit 24 winners to four from his opponent.

He put it succinctly: “Lost only two games in the first two matches. Can’t be better than this, for sure.”

He, too, is here on business: With his 12th match-win in a row, Djokovic is bidding to win his fifth Masters title in a row. And the draw has fallen well for the Serb. Having played a qualifier and then a Lucky Loser, he next plays the No38-ranked Guillermo Garcia-Lopez, who fought from a set down to upset fifth seed Tomas Berdych, 4-6, 6-3, 6-1, in two hours six minutes.

A long match was probably the last thing the Spaniard needed against a fresh defending champion, as he is playing here after a title-winning run in Casablanca plus three demanding rounds. Conversely, Djokovic is the only one of the top four not to meet his allotted seed in the quarters. His has the makings of another very fleeting visit to Centre Court.