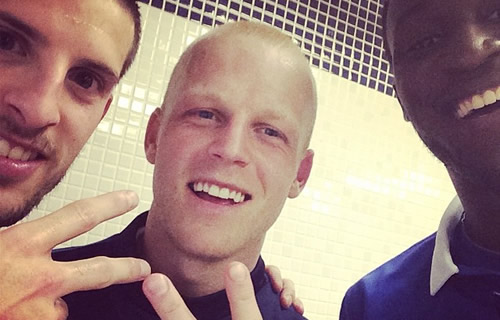 Everton took a step towards beating Arsenal to Champions League qualification after a convincing 3-0 victory over the Gunners at Goodison Park on Sunday.

Goals from Steven Naismith and Romelu Lukaku handed the Toffees a 2-0 lead in the first half, before Mikel Arteta’s own-goal capped a miserable afternoon for Arsene Wenger’s side, who are now just a point above Everton having played a game more.

Sunday’s lunchtime kick-off inevitably prompted plenty of activity on Twitter – and here are our favourite updates, in chronological order.

Former Everton striker Tim Cahill (@Tim_Cahill) tweets his delight as the home side take the lead: “Yesssssssss great ball by Bazza and well followed up by #Naismith that will defo settle the nerves. @TC4Academy #COYB”

Celebrity Arsenal fan Piers Morgan (@piersmorgan) is not happy as Lukaku makes it 2-0: “Superb goal. All the pace, power and clinical finishing we don’t have. #EFCvAFC”

Former Norwich man Darren Huckerby (@hucks6dh6) is impressed by the Toffees: “What a great goal that is, Everton are all over Arsenal ! #SuperSunday”

Ex-Arsenal midfielder Ray Parlour (@RealRomfordPele) is not enjoying the game: “Come on lads show a bit of fight. Be proud to wear that shirt. This is a cup final, don’t worry about wembley! #frustrating”

Morgan (@piersmorgan) chimes in again at the break to vent his anger: “Another shameful 1st half performance vs a Top5 team. Yet still many Arsenal fans cry: ‘Wenger forever!’ Ridiculous. #WengerOut”

Stan Collymore (@StanCollymore) gives his view of proceedings: “Arsenal weak,disorganised, lack leaders.haven’t tried a leg in front of their fans.”

Manchester United defender Rio Ferdinand (@rioferdy5) reserves special praise for the man of the match: “Ross Barkley is asking the England manager many a questions with his performances of late – “are you ready for me” being one of them!!”

The Everton youngster himself ‏(@RBarkley20) is thrilled: “What a result that was”

As is striker Lukaku ‏(@RomeluLukaku9): “What a win! Congrats to my partners! The road is long but we’re on the right track!”

And finally, Danny Higginbotham (@Higginbotham05) is full of praise for Toffees boss Roberto Martinez: “Got to say before this season I wasn’t to sure about Martinez. I thought he was fortunate as in terms of he always had a great second half of a season so people talked about him in the summers. If you swapped it around and his first half of season was great and second half poor”