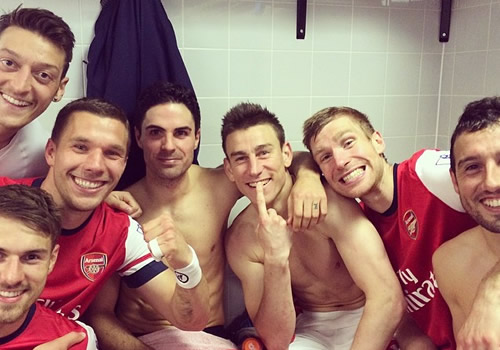 Lukas Podolski scored twice as Arsenal remained in fourth place in the Premier League thanks to a comfortable win over Hull City.

Aaron Ramsey opened the scoring after half an hour before Podolski made it 2-0 before half-time with a low shot. And the Germany international capped off the win when he finished from close range shortly after half-time.

The victory moved the Gunners four points clear of fifth-placed Everton ahead of the Toffees’ clash with Manchester United.

The Easter Sunday clash inevitably prompted plenty of activity on Twitter – and here are our favourite updates, in chronological order.

Mark Bright (@Mark__Bright) is not impressed as the game has to be halted after some advertising hoardings are blown onto the pitch: “This is the Premier League, Micky mouse advertising boards. Come on Tigers get it sorted…”

Rugby star Ugo Monye (@ugomonye) is impressed by the opener at the KC Stadium: “Arsenal on flames. That goal”

Morgan (@piersmorgan) remains unimpressed after Arsenal’s recent dip in form: “No point getting over-excited about beating teams like Hull. We’ve been annihilated by all 4 League rivals. #afc”

Ex-Norway international Jan Aage Fjortoft (@JanAageFjortoft) sings Ramsey’s praises: “Fair to say that @aaronramsey is very important for this Arsenal. In my opinion, even more important than Özil and Wilshere right now #AFC”

The man of the moment Ramsey (@aaronramsey) is a happy man after his spell on the sidelines: “First league start in 4 months… good to be back!! #AFC”

Two-goal hero Podolski (@Podolski10) is understandable thrilled and posts the picture above: “Perfect result, great snap shot in the locker room;) Happy Easter to all of you….. #afc #coyg #team…”

Arsenal playmaker Mesut Özil (@MesutOzil1088) was delighted to be back after his hamstring injury: “#Amazing. It feels great, to be back. Thanks for the support. #afc #premierleague”

And finally, Ian Wright (@IanWright0) issues Arsene Wenger some advice ahead of the forthcoming transfer window: “Arsenal, go and buy Hernandez from United and put him out of his misery. He will score the goals!”

Everton 2 Man United 0: Top-four race will go down to the wire, says Coleman