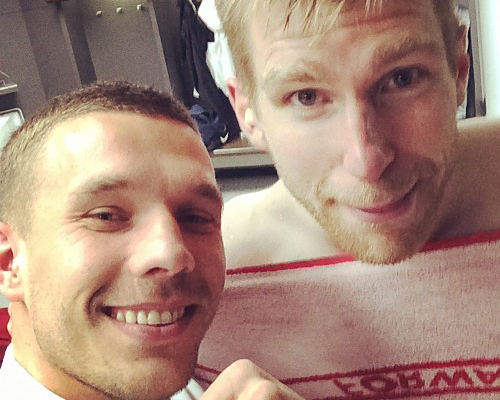 Arsenal booked their place in the FA Cup final after the Gunners were 4-2 winners against Wigan Athletic in a dramatic penalty shootout at Wembley.

Per Mertesacker netted an 82nd-minute equaliser to force extra-time after the German’s foul on Callum McManaman allowed Jordi Gomez to open the scoring from the penalty spot.

Here is a selection of the best Twitter reaction from the professionals, past and present, in chronological order to the weekend’s first FA Cup semi-final.

Celebrity Gooner Piers Morgan (‏@piersmorgan) isn’t impressed: “This has been a pathetic performance. How can any Arsenal fans continue to defend this crap? #Afc”

Gunners fan Mo Farah ‏(@Mo_Farah) takes a break from his London Marathon preparations to rally his side: “Come on @Arsenal……!!!!!”

Arsenal legend David Seaman (‏@thedavidseaman) is well-placed to judge the performance of Arsenal No2 in the shootout – it was excellent: “Yesssssss Love it Lucas!!!!”

Republic of Ireland defender Sean St Ledger ‏(@seanstledger12) puts Wigan’s performance in context of the Championship play-offs: “If Wigan make the playoffs which it looks like they will. Think they’ll be very difficult to beat.”

More from Özil ‏(@MesutOzil1088): “Arsenal never gives up. Thanks Per, Thanks guys. You made my Day.”

Comedian Jack Whitehall (@jackwhitehall) wasn’t as confident as Ozil in the Arsenal players: “Oh Arsenal f**k you for putting us through that. I’ve aged ten years and I’ve bitten my fingers to stumps! I need a drink.”