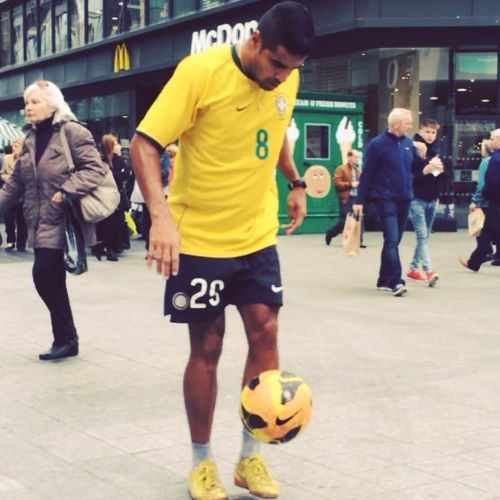 Philippe Coutinho may be Liverpool’s current darling after his winner against Manchester City, but the Brazilian doesn’t appear to be the only talented footballer in his family.

The 21-year-old, who moved to the Reds from Inter Milan in January 2013, netted a 78th-minute strike which sealed a 3-2 victory over title rivals Manchester City at Anfield on Sunday.

However, Coutinho’s wife, Aine, uploaded a video of the Liverpool midfielder’s “uncle” showing of his samba skills outside a McDonalds in the city centre on Friday.

While his “uncle” may have impressed the locals with his superb ball control, Coutinho has no fear of losing his place to his relative any time soon after his impressive form in recent weeks.

Coutinho’s winner against the Citizens was his fifth Premier League strike of the season, with the South American also making six assists.

And the popular Brazilian took to his Twitter page to celebrate a vital win which leaves Liverpool two points clear of Chelsea and a further seven ahead of City.