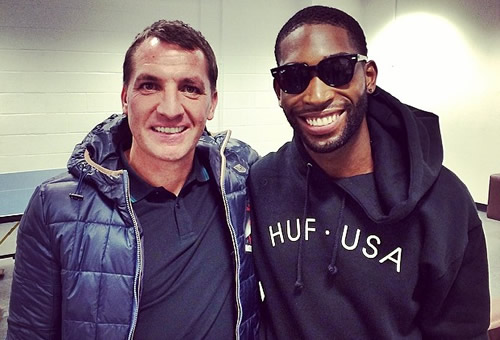 Liverpool boss Brendan Rodgers took some time out from his side’s Premier League title bid to chill out backstage with rap star Tinie Tempah after his concert.

The Northern Irishman, whose side are top of the table heading into the final five games of the season, was pictured with the star after the concert at the Echo Arena.

Tinie posted the photo above on Instagram and wrote: “Look who came to say hi after the gig tonight! Top man!!! @BrendanRogers congrats on your success! #EXCELLENCE #DEMONSTRATIONTOUR #DISTURBINGLIVERPOOLFollow”

Liverpool can take a big step towards winning their first top-flight title in 24 years if they beat Manchester City at Anfield on Sunday afternoon.

The Reds are currently on a sensational nine-game winning run in the Premier League, having beaten Arsenal, Manchester United and Tottenham in recent weeks.