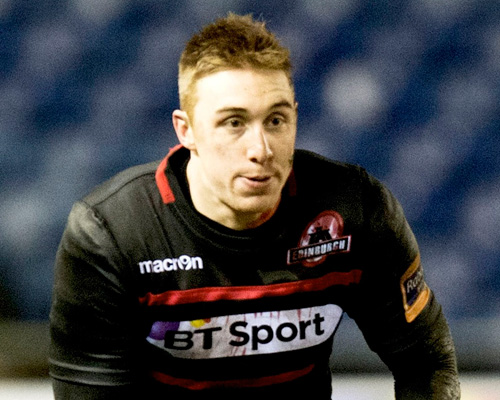 The young back three, who have all won one cap with the senior Scotland team, will remain with the Murrayfield-based club until 2016.

We have good synergy and spirit in our squad

“Attracting and retaining quality Scottish players is absolutely critical for us, and is central to our vision, so it’s fantastic news for the club that these three have re-signed,” said Edinburgh head coach Alan Solomons.

“All of them have played an invaluable role in the progress we have made at the club and it’s terrific to see them commit to Edinburgh Rugby for a further two seasons.

“We have good synergy and spirit in our squad, which is vital to realise our vision and build a sustainable club.”

Bristol-born Cuthbert, who spent seven years with Aviva Premiership club Bath Rugby after coming through their academy, has made 23 appearances in his first season at the club, including a man-of-the-match performance against Newport Gwent Dragons on Thursday.

“I’m really happy to extend my time at Edinburgh Rugby, especially with the game time and the way I feel I’ve played this season,” the 26-yaer-old said.

“I think the club is going in a good direction and it’s great to be part of a team that’s so young and so eager to keep improving.

“We’ve got a really good group here and I think we’re building something special.”

Fife, 23, has become a regular on the wing under Solomons since joining the club from
Currie in 2011 and made his Scotland debut in this year’s Six Nations thrashing at the hands of Wales at the Millennium Stadium.

“I’m delighted to extend my contract,” Fife added. “As a local boy from Edinburgh I get a real buzz when I play for the club. It’s a huge honour to play for your local team, a team that I’ve watched since I was at school.

“Every year this club has helped me develop so much, and I feel that the coaches we have will help me take another step forward in the coming season.”

Brown, who turned 24 last week and made his 50th appearance for the club earlier this season since joining in 2010, also expressed his delight at extending his stay with his home-town club.

“This is where I’ve always wanted to play so I’m delighted to be staying on,” Brown said. “I wouldn’t want to be anywhere else.

“I’ve been really happy at the club and I really like the way that we’re playing. We have some really good players in key positions and we’re a real tight-knit team.

“The coaches have brought a really good structure to our game. The players are buying into it and I think that, together, we’ll make strides in the coming months and years.”

Much has been said about the number of southern hemisphere players to have joined Edinburgh under New Zealander Solomons, but the trio are the latest Scottish internationals to commit their immediate future to the club.