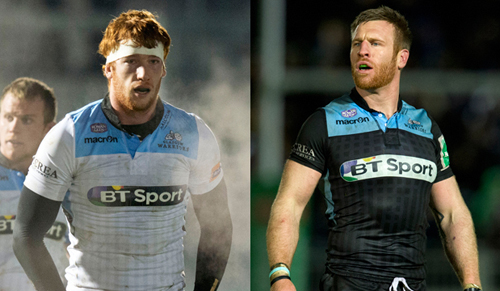 The Scottish side have been on a mission this season to retain their star players and the back-row duo will remain at Scotstoun Stadium until at least May 2016.

I’ve really developed as a player over the last four years, getting regular game time at the Warriors and playing for Scotland

Harley and Holmes have joined outside-half Duncan Weir and flanker Chris Fusaro in penning new deals, with centres Mark Bennett and Alex Dunbar contracted to May 2017.

“It was really important for us to get Rob and Tyrone re-signed as the back-row is a very competitive area for most teams,” said Warriors head coach Gregor Townsend.

“Rob is a very consistent player and is extremely hard working. He is always prepared to put his body on the line in training and in games.

“He’s usually one of the players who plays the most rugby for us and this season is no exception. Rob is developing his running game, his catch-pass skills and his line-out ability is also improving, so he’s got a great future ahead of him.

“Tyrone has been great for us since joining in the summer. He’s really given us competition at openside and has pushed Chris Fusaro to playing at his best.

“Tyrone is a low tackler and a very committed player, and has played very well for the club, with the Exeter Chiefs match at Scotstoun being a standout.

“As we approach the most important part of our season, it is a boost to have secured Rob and Tyrone for the next two seasons.”

Harley, who joined the Warriors in 2010 from West of Scotland, has made 93 appearances for the RaboDirect Pro12 side and won his maiden Scotland cap on the 2012 mid-year tour of Australia and the Pacific Islands.

“I’ve really developed as a player over the last four years, getting regular game time at the Warriors and playing for Scotland,” Harley said.

“I feel like this is the perfect place for me to continue my development, working with a great group of players and coaches.”

A former Cornish Pirates and Petrarca blindside flanker, Johannesburg-born Holmes joined the Warriors on a one-year deal last summer and has made 17 appearances for the Warriors as well as making his Scotlnad A debut against England Saxons at Scostoun in January.

“It was a great decision to come to Glasgow in the summer and I’m delighted to be staying for another two years,” Holmes added.

“My father was born in Peebles and he is so proud of what I’ve achieved in Scotland this season. I’ve already sent my Scotland A shirt back to him in South Africa.”

The Warriors have also confirmed that 21-year-old EDP scrum-half Murray McConnell has signed a one-year professional deal after an impressive season in the RBS Premiership with Ayr.

McConnell has made two appearances for the Warriors in the Pro12 and was on the bench for their win over Connacht at Scotstoun in February.

Chinese Grand Prix 2014: Four talking points ahead of the race