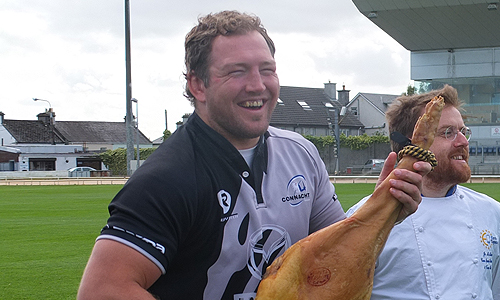 Veteran lock Michael Swift and flanker Mata Fifita have both signed one-year extensions with Connacht as the Irish province allow eight players to depart the Sportsground this summer.

Swift, 36, is Connacht’s longest-serving player with 262 appearances for the Irish club, including a record 180 in the Celtic League/Pro12.

Every year there are progressive changes happening at the club

“[Michael Swift] continues to defy the years and prove himself as a true Connacht man,” said head coach Pat Lam.

“His work ethic, passion and commitment to Connacht Rugby is inspirational to the management, players, sponsors and supporters.

“When myself and [assistant coach] Dan [McFarland] sat down with him recently, it was evident how much he wants this contract. He is still so hungry to play and we know that he will continue to push hard in training and fight for a place while also leading the squad.

“[He] is, and always will be, a fantastic ambassador for this club.”

The London-born forward became an integral part of Connacht after joining All-Ireland League club Galwegians in 2000 after spells at Richmond and Leeds Tykes.

“I’m delighted to have another year of rugby with Connacht to look forward to,” said Swift. “Every year there are progressive changes happening at the club.

“I think there is something special happening here at the moment so I just want to be part of it for as long as possible.

“I’m excited about finishing off this current season on a high and being part of another Connacht squad going forward.”

Former Scotland outside-half Dan Parks and Ireland full-back Gavin Duffy are among the players heading out the door as Lam looks to rebuild a squad capable of challenging for the top six in the Pro12.

“It’s a tough time of year for players and management who have to make decisions about the future of the squad,” Lam said.

“In the professional game, no squad is ever the same from one year to the next and there are always a number of players moving on.

“These guys have given so much to Connacht Rugby and we have nothing but respect for them as well as appreciation for what they have done.

“All these men are extremely committed and ambitions individuals and I know that they will go on to achieve great things in other areas of their lives, bringing with them the values and skills they have honed at Connacht.”