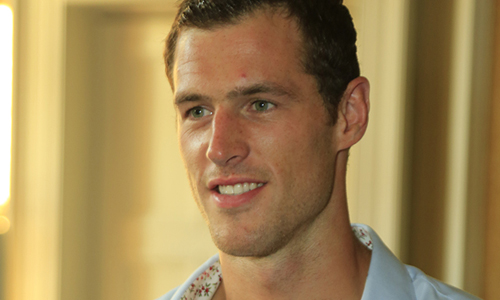 Scotland wing Tim Visser will make his long-awaited first start for Edinburgh since breaking his leg in October against bottom side Zebre on Saturday.

The Dutch-born speedster came off the bench for the final five minutes to make his 100th appearance for the club in last week’s RaboDirect Pro12 defeat to Cardiff Blues at Meggetland and links up with Jack Cuthbert and Tom Brown in the back three.

Head coach Alan Solomons has been forced to make changes in the forwards for the must-win clash with locks Grant Gilchrist (ankle) and Izak van der Westhuizen (head knock) unavailable with Scotland A international Ollie Atkins and development player Ben Toolis coming in.

In the front row, Wicus Blaauw comes in on the loosehead in place of Al Dickinson with Roddy Grant in for Cornell du Preez, who joins Dickinson on the bench as Solomons looks to rest both players.

A new half-back combination sees South African Carl Bezuidenhout partnered with Sean Kennedy as Edinburgh look to maintain their 100 per cent record against the Italian side and keep their slim hopes of a top six finish to qualify for the Rugby Champions Cup alive.

“Tim Visser and Matt Scott have played very little for us and that’s been our loss,” Solomons said.

“Tim is a very good finisher and it’s excellent to have him in the side, though we shouldn’t expect too much from him as this is really his first proper outing.

“We know this is going to be a tough fixture for us. They are a side not to be underestimated, and were probably a little bit unlucky to lose against the Scarlets in Wales last weekend.

“They will certainly be stronger at home and go into the match with a lot to play for, because whoever finishes higher between them and Treviso will go into the European Rugby Champions Cup.

“They will be well motivated and will present us with a massive challenge.”

Despite their position at the bottom of the Pro12, Zebre have found form to hold Newport Gwent Dragons to a 25-25 draw and giving up a half-time lead to lose 27-20 at the Scarlets last week, but they have never beaten a Scottish side in six attempts.

Edinburgh have won just one of their last four league matches—against the Dragons in Newport on 3 April—and have lost on their last two visits to Italy, including this month’s trip to Treviso, but start as favourites.