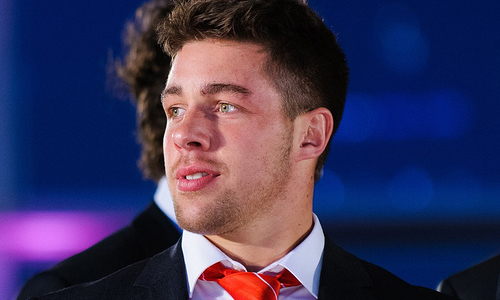 The 25-year-old scrum-half, who made two starts in this year’s Six Nations campaign, was injured in the second half of the Ospreys’ 11-9 defeat at Glasgow Warriors in the RaboDirect Pro12 on Friday and left the field after 56 minutes.

Following discussions with the surgeon post-operation, we will be in a better position to discuss any potential return to play date

Webb ruptured an anterior cruciate ligament against Leinster on the final day of last season and spent six months on the sidelines after undergoing reconstructive surgery before returning in November and enjoying a good run of form for the Ospreys which saw him called up to Warren Gatland’s Six Nations squad.

“Rhys had a scan on Monday which excluded any signs of ligament damage,” confirmed Ospreys medical performance manager Chris Towers.

“However, he has gone to London for keyhole surgery to deal with a cartilage problem.

“Following discussions with the surgeon post-operation, we will be in a better position to discuss any potential return to play date.”

Webb joins a growing list of Wales stars likely to be out of action for the remainder of the season.

While Webb may not make it on the plane to the southern hemisphere, Wales have no shortage of alternatives.

Racing Metro’s Mike Phillips is expected to make the trip along with Scarlets duo Rhodri Williams and Gareth Davies—the RaboDirecto Pro12’s leading try-scorer this season—has also been tipped for a call-up after an impressive season with the West Walians.

Wales will head to South Africa for two Test matches against the Springboks after a warm-up match against Port Elizabeth-based Currie Cup side Eastern Province Kings on 10 June.