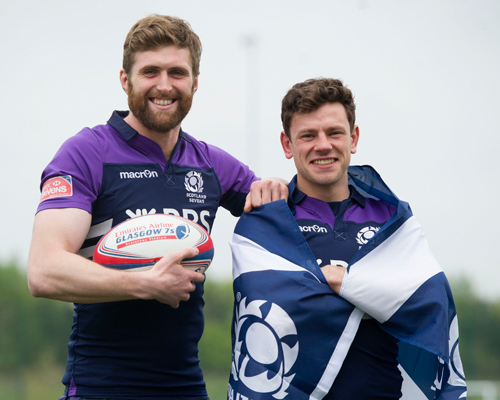 Stephen Gemmell insists he will be ruthless as he aims to lead Scotland to a medal at this summer’s Commonwealth Games in Glasgow.

The Scotland 7s head coach was bullish about the prospect of calling on professional 15-a-side players if his Sevens specialists don’t perform in the final two rounds of the HSBC Sevens World Series starting with this weekend’s Glasgow 7s at Scotstoun.

“I’ll be as ruthless as I need to be,” said Gemmell, who led Scotland to sixth in the 2010 Commonwealth Games. “That’s nothing new. It’s not something that I’ve not said to the players up front.

“I’m tasked with achieving a medal in the Commonwealth Games as the coach as the Scotland 7s squad and I will make sure I leave no stone unturned to get the strongest squad available, but it has to be the strongest Sevens squad. There is a big difference.”

Scotland are currently 12th in the World Series standings, far short of Gemmell’s target of finishing in the top eight, but their last outing in Hong Kong brought hope as they defeated Kenya, Argentina and France on day three to win the Bowl.

“Our performance in Hong Kong on day three when we beat the three teams ranked above us, obviously James, Lee and Mark Bennett were with us and they made a difference,” he added.

“I’ve always said, and been up front, that I’ll select the strongest squad possible for every tournament.

“In a perfect world we’ll have a squad capable of medalling in Glasgow [in July]. This tournament—as with the previous seven tournaments in the World Series—is an opportunity for guys to put their hands up. The same applies to the 12 players selected for this weekend and the guys going down to [the final round of the World Series in] London.

“The squad that train regularly have been told, in no uncertain terms, that they’ve got best opportunity, but if their performances don’t match what our aspirations are then I’ll make sure I leave no stone unturned to get the strongest squad I can going into the Commonwealth Games.”

Despite Glasgow Warriors riding high in the RaboDirect Pro12, such is the strength in depth of their squad, Gemmell has been able to dip into the talent pool by enlisting the services of a number of 15s players including flanker James Eddie and wing Lee Jones, who are again included for the Glasgow tournament.

After an impressive tournament in Hong Kong, Mark Bennett has continued his form for the Warriors and has not been selected, but fellow centre Richie Vernon—converted from a back-rower under the guidance of Warriors head coach Gregor Townsend—has been called up to the Scotland 7s squad for the first time since 2009.

Edinburgh’s Nick de Luca is back in the squad for the first time since 2006 after being frozen out by his club ahead of his departure to Biarritz in the summer and Gemmell is delighted by the boost to the squad.

“It’s been clear this year that when we’ve brought in players of a Sevens pedigree—of which, both Richie [Vernon] and Nick [de Luca] have—they’ve made a big impact on the squad,” he added.

“Our home tournament is hugely important, but it’s important not only in its own right as part of the World Series but we’re also getting close to the Commonwealth Games so any opportunity to bring in guys of the calibre of Nick and Richie makes sense from our point of view.

“We’re fortunate that I’ve got a very good close working relationship with Gregor and Alan [Solomons] with Glasgow and Edinburgh and with Scott Johnson as director of rugby and currently interim [Scotland] head coach.

“It’s a busy period. It’s an important period for Scotland during the summer, but massively important for Sevens. I think it’s safe to say that I’ve got the support of the relevant people at Murrayfield to allow me to select and prepare a squad that is capable of performing at the level at Ibrox at the end of July.”

Scotland lost two of their three pool matches at Scotstoun last year to England and New Zealand before bowing out in the Bowl semi-finals to Kenya and this year will be equally tough at home for Gemmell’s side with Australia, USA and Spain awaiting them on day one.

“It’s our home tournament so we want to put out a strong performance,” Gemmell said. “We’ve disappointed in the last two home tournaments in Glasgow and we’ve got a responsibility to show what we’re capable of in front of our home crowd.”