Sevens World Series: Scott Curry is looking to stave off the pressure on New Zealand ahead of Glasgow Sevens 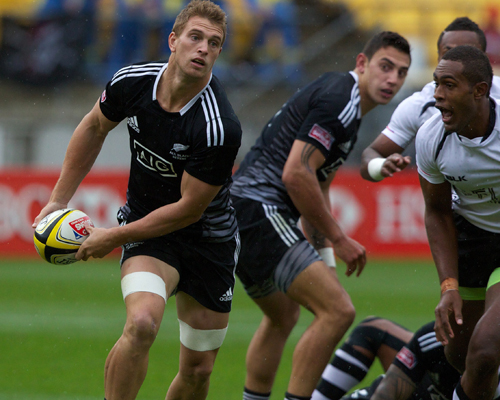 Scott Curry is looking to stave off the pressure on New Zealand as they face one of their toughest tournaments in the HSBC Sevens World Series in Glasgow.

The All Blacks are in Scotland’s second city for the penultimate round of the World Series, but will return in July to defend their Commonwealth Games crown at the two-day event at Ibrox Stadium.

Four gold medals from four tournaments definitely adds more pressure, but we’ve just got to play it like any other tournament

New Zealand have walked away with Gold every year that Rugby Sevens has been an event since 1998 in Kuala Lumpur and are favourites to pick up a fifth gold medal this summer.

“We talk about it a little bit, that we’ve got a legacy to uphold and with the Commonwealth Games record and World Series record that we’ve got, we’ve definitely got a bit more pressure,” said Curry.

“We’re definitely thinking about it. We’re just trying to focus on this weekend first. The boys have always got it in the back of their minds about coming back for the Commonwealth Games, but it’s an exciting time.

“Four gold medals from four tournaments definitely adds more pressure, but we’ve just got to play it like any other tournament, focus on our first game and go from there.”

New Zealand returned to the top of the World Series standings after a 26-7 win over England in the Cup final in Hong Kong last month.

But the All Blacks face title rivals South Africa in the pool stages on Saturday after receiving a welcome at Sgoil Ghàidhlig Ghlaschu (Glasgow Gaelic School) today, including a Haka in Gaelic from enthusiastic pupils before Curry and two of his team-mates joined in with some mini passing games in the school’s sports hall and were then mobbed by keen autograph hunters.

“Everywhere you go is slightly different,” he added. “So to come to Glasgow and get a reception like this is awesome.

“We’re expecting a pretty tough tournament. We’ve got one of the toughest pools going round with Samoa, South Africa and Portugal.

“To have two of the top sides in the World Series in one pool is going to be pretty tough. We didn’t get the result we wanted in Japan, coming fourth, so to get that right in Hong Kong and win the tournament is massive for the World Series.”

The All Blacks will again be skippered by DJ Forbes, named in the team of the round in Tokyo and player of the tournament in Hong Kong, while Curry joins familiar names including Tim Mikkelson, Sherwin Stowers and Ben Lam.

But the selection of Crusaders wing Adam Whitelock has become a major talking point, and Curry believes his inclusion is a boost to a squad and has no issue with players being parachuted in if they can step up.

“It’s pretty tough coming from a 15-man game,” he said. “The fitness base is slightly different, it’s a lot more intense but some players, like Adam—who is one of the fittest players in the Crusaders squad—[can overcome that] so he’s fitted in really well.

“They’ve got to turn up and troll—no-one is a shoo-in at all. So if they turn up and they’re the best player for the job then so be it.”

No nation boasts an honours roll anywhere near as impress as that of the All Blacks and the expectation may be that they will win at Scotstoun this weekend.

And Curry is all too aware of the threat not just from South Africa and Fiji, but from every core nation stepping up their development.

“It’s definitely changed since I’ve been in the team,” he said. “The likes of Portugal and the Tier 2 teams are definitely stepping up.

“Look at Canada this year: they’ve got to three semi-finals, so for a team like them to get where they are is pretty massive.

“Knowing those other teams are catching up is always in the back of our minds.”

World Cup leader Lizzie Armitstead has other targets in her sights