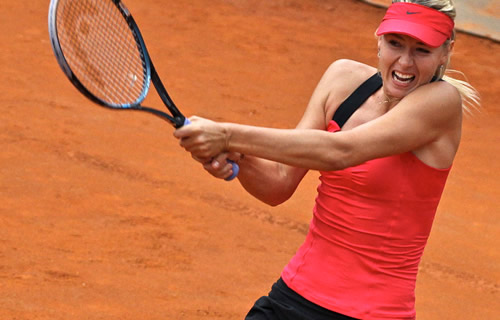 Less than two years ago, one of the most successful women in world sport, Maria Sharapova, was about to claim the elusive French Open title for the first time.

2012 not only completed her resume of Majors but saw her reclaim the No1 ranking at the height of the European summer, almost seven years after she reached the top of the tennis pile for the first time in August of 2005.

Sharapova went on, in an Olympic year, to claim silver in London, reach the semis of the US Open, the finals in Beijing and at the WTA Championships, and end the year as world No2.

But despite making three big hard-court finals at the start of 2012, it was in Stuttgart that her title-winning ways began. There she beat formidable opposition in the shape of three top-five opponents, and went on to claim the Rome Premier on her way to Roland Garros victory.

But as she embarks on her Stuttgart campaign this week, the Sharapova picture is rather different, for 2013 was less kind to the tall Russian.

It started well enough, with semi finishes in Australia and Doha, the Indian Wells title and a runner-up place in Miami. Back on clay, she defended her Stuttgart title, made the finals in Madrid and almost defended Roland Garros too—but was thwarted by Serena Williams in the final.

Then a second-round exit at Wimbledon heralded tougher times—indeed she would play just one more match in the entire year. First a hip injury forced her out of Stanford and Toronto, and then shoulder problems ended the rest of her season.

She still ended the year at No4, but with so many points to defend through the first months of 2014, and slightly poorer results, Sharapova has arrived at her first clay tournament, back in Stuttgart, outside the top eight.

In practice, her pursuit of a third title in the German city, the 30th title of her career, could have looked worse. This hugely popular tournament, the WTA’s Premier Tournament Of The Year award in five of the last six years, is the only indoor clay tournament on the calendar. But while it boasts big points—470 for the winner—the draw contains only 28 women, and Sharapova’s biggest rivals—No1 Williams, No2 Na Li and No4 Victoria Azarenka—are all missing.

Even so, the Russian faced the toughest of tests in her first match against No26 Lucie Safarova, though perhaps it was not entirely a surprise. In both previous meetings—in Miami last month and at this very tournament last year—the two women went to three sets.

This match lasted almost three and a half hours—the third longest match of the season—with the defending champion surviving in the third tie-break, 7-6(5) 6-7(5) 7-6(2).

It also proved to be their most dramatic match to date, with Safarova closing down a 5-1 deficit in the final set to take a 6-5 lead. But Sharapova won 11 of the next 13 points to break back before racing through the deciding tie-break.

Sharapova’s draw does not get much easier, either. Both her previous matches against Anastasia Pavlyuchenkova also went to three sets, with Pavlyuchenkova winning their most recent encounter at the Paris Indoors this year.

The rest of her draw illustrates the problem currently facing Sharapova. In Stuttgart, she is seeded sixth even though the top three women are missing. And that means she is scheduled to face world No3 and top seed, Agnieszka Radwanska, in the quarter-finals.

And Sharapova needs to reach the semis if she is to stay in the top 10, where she has been ranked since April 2011. But even if she maintains her No9 ranking, she is in danger of facing one of the elite women—Williams, Li, Azarenka—at the quarter-final stages of the big tournaments that loom over the horizon: The Premier Mandatory in Madrid follows hot on the heels of Stuttgart, with another Premier, Rome, sandwiched in before the French Open.

Of course it will not just be Sharapova’s own form that determines her success or otherwise through this intense clay swing.

Azarenka has had problems since injuring her foot in Australia, playing just one match in Indian Wells since. There is no clear indication of when she will next test her foot.

Li, Australian Open champion and with a 21-3 win-loss record this year, heads the race to Singapore. She is also a former French Open winner, but she is yet to play a clay match this season and pulled out of Stuttgart with a knee injury.

And then there is Williams, who Sharapova has not beaten in a decade. The world No1 tops the rankings by almost 5,000 points, but has huge numbers to defend during the clay swing: Last year, she was undefeated through Charleston, Madrid, Rome and Roland Garros.

But Williams has already shown some fragility on the 2014 clay, falling in her first match in Charleston. Her comments after that loss—that she was “just dead”—suggest that her heavy schedule of the last 18 months have depleted the mighty American. Madrid may reveal by just how much.

So winning her third Stuttgart title could be a valuable launch-pad for Sharapova to take advantage of any weaknesses among her big rivals. It would also send out an important signal to some other names making their mark this season.

Already on clay, Caroline Garcia has won in Bogota, and the runner-up, former No1 Jelena Jankovic, is a solid clay player—and ranked above Sharapova at No8.

There is Simona Halep, the break-out player of last year and now ranked No5, and Eugenie Bouchard who, though inexperienced thus far on clay, has the all-court skill to transition well after her ground-breaking semi finish in Australia.

The first clay winner of spring was the popular Andrea Petkovic in Charleston—and all three of her titles have come on clay. Alize Cornet has just won the hard-court Katowice, but is a former French Open junior champion. And Ana Ivanovic, winner a fortnight ago in Monterrey, won the French Open in 2008.

So the challenges come from every direction not only in Stuttgart but through the other half-dozen clay events that pave the way to Paris. However, if anyone is willing to take on a challenge, it is Sharapova.