Commonwealth Games 2014: Scotland 7s captain Stephen Gemmell is confident that the hosts can medal this summer 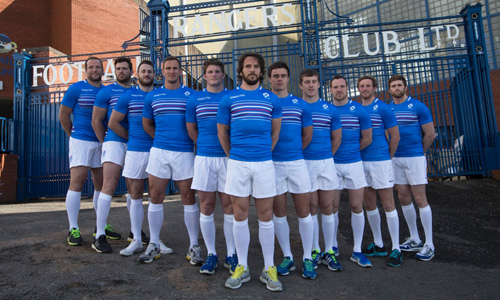 Stephen Gemmell insists he is confident he has selected a Scotland 7s team capable of achieving a medal at this summer’s Commonwealth Games in Glasgow.

After leaving no stone unturned, the Scotland 7s head coach has dipped into the talent pool of RaboDirect Pro12 finalists Glasgow Warriors and fellow professional club Edinburgh to name the “strongest squad available” for the two-day rugby sevens event.

“I’ve said all along since I came back last January that I was tasked with medalling in a home Games and I believe I’ve assembled a squad capable of doing that,” said Gemmell.

“The sevens squad announced today is a one I believe is capable of achieving our highest-ever finish in the Commonwealth Games.

“That’s the strongest squad I’ve named as a Scotland 7s coach. It’s one I’m hugely excited to be leading towards a home Commonwealth Games.

“It’s one I believe has the right balance of players who are capable of competing with the very best in the world, which is what we’re up against playing in our home Commonwealth Games, and is one I believe builds on the formula we showed at Scotstoun at the beginning of May.”

With 66 days to go until the rugby sevens event at Ibrox, Gemmell has enlisted the services of a number of 15s internationals including Glasgow Warriors wingers Sean Lamont and—Sevens debutant—Tommy Seymour, both of whom will join up with the squad after Scotland’s summer tour of the Americas and South Africa.

In-form Warriors centre Mark Bennett—left out of Vern Cotter’s Scotland squad for the summer tour—is also included after spells in the Scotland 7s side in two rounds of the HSBC Sevens World Series and at, 21, is the youngest member of the squad.

Four players have featured in the Commonwealth Games before: Lamont (Manchester 2002) and captain Colin Gregor (Melbourne 2006) with Lee Jones and Colin Shaw being the only survivors from Scotland’s sixth-place finish at Delhi 2010.

To have a chance of reaching the medal stages, Scotland must overcome a tricky pool made up of four-time Commonwealth Games winners New Zealand, Canada—Scotland’s victors in the Glasgow 7s Cup semi-finals—and a relatively unknown Barbados outfit.

“It’s a tough pool draw. Two of the teams we know very well, one we know a little of because they played in the qualifying tournament in Hong Kong. New Zealand are quite rightly the best team in the world, won the World Series again and will pose a significant challenge.

“No Scotland team has ever beaten New Zealand, but you can only beat them if you play them, so we’ve got an opportunity to play them at home with a strong squad and massive home support.

“Canada are a team we’ve always had very close games with and they’ve performed outstandingly well in the World Series this year. Again, with the squad we’ve got and the way that we’re able to play the game, we’re capable of finishing in the top two in our pool and getting into that Cup competition which is what we’re aiming to do.”

Should Scotland achieve that finish, they will likely face World Series runners-up South Africa, who defeated them at the same stage in Dehli four years ago, or Kenya, but Gemmell is not fazed by any nation they could face.

“A Scotland Sevens team with the right preparation, right personnel and a home crowd is capable of being in the latter stages of the Cup competition, which is where we need to be,”Gemmell added.

“Like anything in any performance, you need a fair wind, you need things to go your way and I’m absolutely confident that this will be the best prepared and the strongest sevens squad that Scotland has ever put out and I’m looking forward to achieving success.”

Jerry Flannery set to swap Arsenal for Munster next season