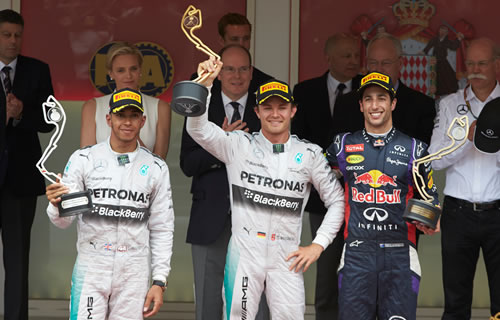 Nico Rosberg and Lewis Hamilton on the podium Photo: Mercedes

Lewis Hamilton made it clear that his relationship with Nico Rosberg does not extend to friendship after his Mercedes team-mate knocked him off the top of the drivers’ championship.

Rosberg claimed victory at the Monaco Grand Prix on Sunday to move four points ahead of Hamilton after taking pole position in a controversial qualifying session.

The animosity between the team-mates was evident during a tense-looking podium ceremony as the two Mercedes drivers barely acknowledged each other.

“We are not friends. We are colleagues,” said Hamilton. “There’s not much to say about our relationship at the moment.”

Rosberg, meanwhile, insisted that the pair’s relationship is not as strained as it appears.

“We’ve always been friends, we always will be friends,” Rosberg said. “But friends is a big word. What exactly is friends? We have a good relationship and work well together.

“We’ve had discussions and the benefit we have is that we’ve known each other for so long. We always sit down and discuss it and then move on and that’s what we’re doing this weekend also.”

Hamilton insisted that he will continue to fight for the drivers’ championship in what is turning into an enthralling battle between the Mercedes duo.

“Generally, there is a fierce battle between me and Nico and it will continue that way to I’m sure quite late in the season,” said Hamilton.

“Nico’s not had a single hiccup through the season so far. Obviously I had a car that didn’t finish in Melbourne but otherwise it’s still quite close, so I’m just going to keep my head up, keep pushing.

“I know the team are working hard for the both of us. The team can sometimes be in awkward positions, which they were yesterday, and their job is really to protect us both and that’s what they did.”