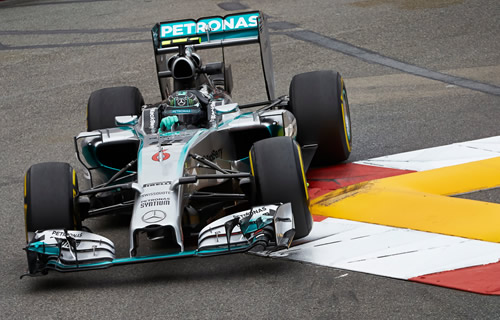 Nico Rosberg held off Mercedes team-mate Lewis Hamilton in an enthralling battle for victory in the Monaco Grand Prix.

The German, who claimed pole position in controversial circumstances on Saturday, held onto first place as he reached the first corner unchallenged.

It was a good day for us. It’s very important for the team to get another one-two

Red Bull’s Daniel Ricciardo was third ahead of Ferrari’s Fernando Alonso and the Force India of Nico Hulkenberg.

“It’s another special day for me, for sure,” said Rosberg, who moved back into the championship lead, four points ahead of Hamilton.

“Lewis drove well and pushed me massively hard. The pressure was on but I kept it cool and pulled a bit of a gap at the end because of the refreshed tyres. Thanks to the team for all their great work.”

Hamilton, meanwhile, played down the eye problem which forced him to drop back in the closing stages.

“It was just something that came through the visor, it was nothing important,” said Hamilton.

“It was a good day for us. It’s very important for the team to get another one-two. I had great pace and I felt I was strong but it’s incredibly difficult to overtake.”

Red Bull’s world champion Sebastian Vettel was forced to retire on lap eight because of power unit problems, and his team-mate Ricciardo added: “It’s really nice to be on the podium. The start was not great, it was frustrating.

“Sebastian [Vettel] had a problem and I got fourth, then Raikkonen had a puncture so we inherited third. At the end, we closed in on Lewis. We tried to put pressure on but third was best we could do.”