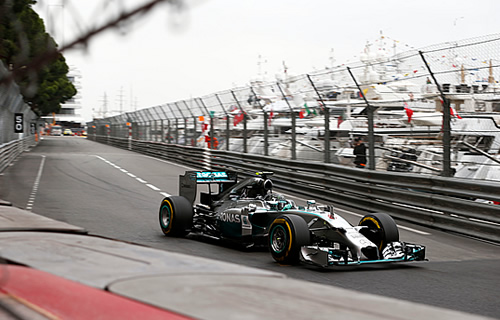 Rosberg finished ahead of Hamilton to take pole for the second year running, despite running off the track at the Mirabeau corner during the final minute of qualifying.

The German had the edge over Hamilton following the first runs in the top-10 shootout, but on his second run, Rosberg drove down the escape road at Mirabeau and then reversed out. The incident brought out the yellow flags and meant Hamilton was unable to improve, handing Rosberg the pole by default.

Of course I’m sorry for Lewis. I didn’t know exactly where he was

After an investigation, race stewards said they could find “no evidence of any offence”.

Rosberg said: “No not [an ideal way to end qualifying.] I thought it was over – I thought the track would ramp up and someone else could beat my time. I’m happy it worked out. Pole at home is fantastic – it couldn’t be better.

“Of course I’m sorry for Lewis. I didn’t know exactly where he was but once I was reversing I did see he was coming up. Of course that’s not great, but that’s the way it is.”

The German added that he was “surprised” that the stewards are investigating the incident, saying: “They’ll see in the data it is all very similar to the lap before and I just locked up the front tyre.”

“It happens and that was that,” said Hamilton. “Yeah, it’s ironic,” he continued, in reference to Rosberg taking pole having brought out the yellow flags which forced Hamilton to back off on his fastest lap. “It was OK, I was up a couple of tenths [on my lap].”