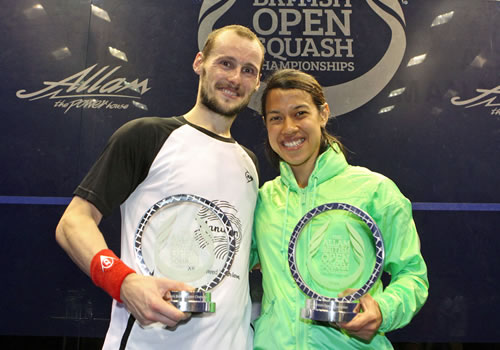 England’s Nick Matthew missed out on a fourth British Open title as he was beaten 3-0 in the final by Frenchman Gregory Gaultier on Sunday.

The final proved one match too far for world champion Matthew as he battled with Gaultier, who now doubles his British Open tally having previously won the title in 2007.

Gaultier said: “It’s an unbelievable feeling to win. I want to sleep now because I only had three hours sleep last night because of the tension.

“To win the trophy once again is amazing. I don’t know if people can understand, I’ve been working so hard for 25 years.

“I’m so grateful to my coaches, physios, all my team and my family back home because they give me the extra push. It’s not an easy job. All the work I’ve done has paid off and I’m really proud.

“Even the crowd were great. I might have been playing Nick in front of a home crowd but I feel they were also supporting me. We travel all around the world and it’s tough to have support so I’m pleased,” he added.

Three-time British Open champion Nick Matthew said: “Greg got off to a great start and that was key, he just carried it on. Sometimes you just have to say someone is too good, and I think that is the case today.

“I wanted to give the crowd something to get behind today but I never quite did it.”

Despite the loss Massaro remained upbeat: “I can honestly say I gave it my all today so overall I’m pretty pleased. I knew today would bring out Nicol’s best level, I hoped it would.

“You want to play players at the top of her game and my main goal was to play my best.”