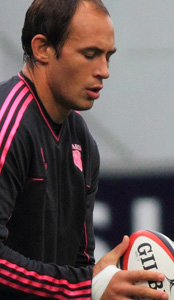 Zebre lock Quintin Geldenhuys will captain Italy after Jacques Brunel named his 30-man squad for their summer tour to the southern hemisphere.

The Azzurri head coach is without captain and talisman Sergio Parisse to injury and star prop Martin Castrogiovanni, who could feature in two finals with Toulon later this month, is rested.

Brunel has continued from his Six Nations ideology by blending experience in the pack with young talent in the backline, including Benetton Treviso duo Michele Campagnaro and Angelo Esposito, while former Scotland age-grade outside-half Tommaso Allan is again included.

Zebre’s Mauro Bergamasco could become the latest Italian to reach 100 caps if he plays in all three matches of the tour—second in the summer squad only to Marco Bortolami.

Italy will play Fiji in Suva on Saturday 7 June, Samoa in Apia a week later and 2019 Rugby World Cup hosts Japan in Tokyo on 21 June.

Italy squad for the Pacific Islands and Japan