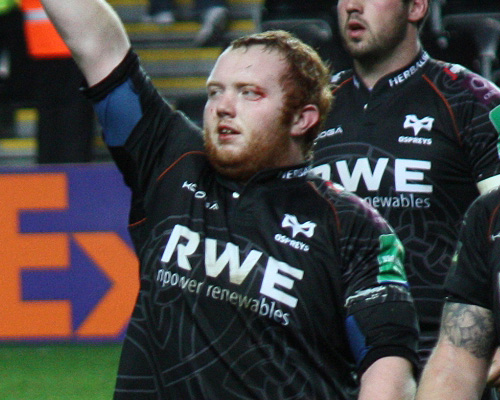 Ospreys prop Dan Suter has agreed a new three-year deal with the south Wales region keeping him at the Liberty Stadium until the summer of 2017.

The tighthead, 20, is the 11th player to pen a new deal this season to remain in Ospreylia as Steve Tandy looks to build a squad for the future.

All I’ve ever wanted is to get out there and play for the Ospreys, testing myself against top quality opposition

News of Suter’s deal is the fourth in as many days following the announcement that South African lock Rynier Bernardo will join from Southern Kings in the summer with young forwards Nicky Smith and Dan Baker also agreeing new deals.

“The three years since I was given my first development contract have just flown by, I can’t believe how quick it’s gone. I feel that I’ve improved as a player and a person in that time and I’m really happy to be carrying on my development as an Osprey for another three years.

“It’s been great to get so much game time this season, all I’ve ever wanted is to get out there and play for the Ospreys, testing myself against top quality opposition.”

Suter, who has Wales international tighthead props Adam Jones and Aaron Jarvis ahead of him, has been a part of the Bridgend Ravens in the last three seasons.

He made his Ospreys debut in January 2013 against Newport Gwent Dragons in the LV=Cup, but broke into the first team to make 14 appearances this season in the RaboDirect Pro12 and Heineken Cup.

“Daniel is someone who works hard, has a tremendous attitude, and just seems to get better every day,” said Ospreys rugby operations manager Andy Lloyd.

“We’ve watched him really develop in this environment over the last two or three years and his work ethic is an example to other young players.

“He’s established himself in and around the group this season and shown that he has the ability to play at this level, getting significant game time.

“Daniel is one of an exciting pool of young props at the region who have come through the development pathway to give us significant front row depth.

“Despite being young, they are getting valuable senior level experience with the Ospreys, something which will stand them in good stead for next season and beyond.”

Heineken Cup 2014: Will Carling and company reflect on semi-finals