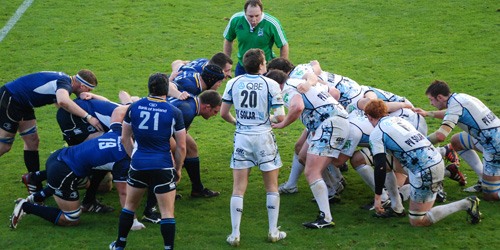 Glasgow Warriors tighthead prop Ed Kalman has called time on his career after struggling to overcome a back problem.

The 31-year-old, who made 101 appearances for the club since joining from Border Reivers in 2007, last turned out for the Warriors in their 28-25 defeat to Leinster on 1 March.

“I would like to thank all the staff at Glasgow Warriors for all they have done for me over the years,” Kalman told Glasgowwarriors.org.

“Having taken a rather unconventional route to professional rugby through Durham and Cambridge University, the idea that I would play even one game of professional rugby seemed implausible, so to have played for over eight years and to have represented my country is beyond anything I could have ever dreamed of.”

His retirement means Kalman will again be on the sidelines as the Warriors do battle with Munster in their first ever home semi-final on Friday in the RaboDirect Pro12, and the Scotland international is proud of his time with the club.

“Coming to play for the Warriors after my time with the Borders was a real homecoming for me,” he added.

“Glasgow is the city I grew up in and call home and to have represented the city and its fans over 100 times is my proudest achievement. I wish the team all the best on Friday night.”

Joining Kalman in leaving the Scottish club are outside-half Scott Wight and hooker Finlay Gillies, who have enjoyed limited opportunities in the 15s game, often finding themselves on duty with their RBS Premiership clubs or the Scotland 7s team on the HSBC Sevens World Series circuit.

As his team-mates were preparing for their last outing with Munster at Thomond Park in March, Wight returned to the home of his former club Melrose to lead a Warriors 7s team to the Ladies Cup at the Melrose 7s.

“Ed has played a big role at the club in recent years and this season he became one of our centurions,” said Warriors head coach Gregor Townsend.

“He has also been in the best form of his career and we’re disappointed for him that he has to retire. We wish him all the very best for the future.

“Scott and Finlay have played a lot with Scotland 7s this season and were also key players in our victory at Melrose 7s.

“They’ve put a lot of work in at training and have contributed to what has been a real squad effort over the last couple of years.

“We would like to thank them both and we wish them all the best in the next stage of their careers.”