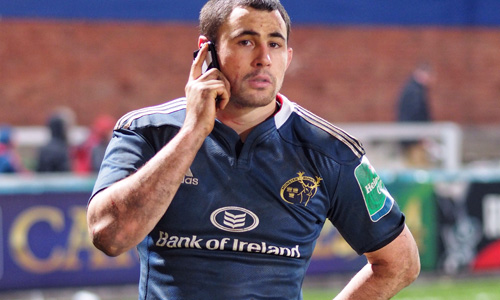 Munster and Ulster have made wholesale changes for their RaboDirect Pro12 interprovincial derby at Thomond Park on Saturday night.

Both clubs are already assured of a place in next week’s semi-finals, but only Munster still have something meaningful to play for, albeit a slim chance of snatching a home semi-final from Leinster or Glasgow Warriors.

Mathematically, Munster can still finish top if they can secure another bonus point win and Leinster lose by eight points or more, but with their provincial rivals hosting an out of sorts Edinburgh side and an in-form Glasgow Warriors hosting Zebre, it would be a miraculous evening for Munster to finish higher than third.

Despite that, Rob Penney had made 10 changes to the side that thumped Edinburgh at Meggetland last week with six promoted from the bench as Munster showcase their strength in depth while Ulster struggle to cope with a growing injury list.

Dave Kilcoyne and Damien Varley come into the front row for James Cronin and the injured Duncan Casey, respectively, with tighthead John Ryan keeping his place.

David Foley comes in for Donncha O’Callaghan to partner Paul O’Connell in the second row, with Paddy Butler shifting from number 8 to the blindside with Sean Dougall on the openside and James Coughlan at number 8.

Ian Keatley starts at outside-half alongside Duncan Williams at scrum-half as JJ Hanrahan and Conor Murray—Munster’s player of the year—drop to the bench.

Felix Jones returns at full-back, so Simon Zebo switches to the left wing as Andrew Conway drops out of the 23, while Gerhard van den Heever keeps his place on the right wing.

Casey Laulala and James Downey resume their midfield partnership as Johne Murphy and Denis Hurley also drop out of the match-day squad.
Simon Zebo switches back to the number 11 jersey with Gerhard van den Heever on the opposite wing and Felix Jones occupies the full-back position having sat out last weekend’s facile win in Edinburgh.

Ulster defeated Munster 29-19 at Ravenhill in January, but they are on a run that has yielded just one win in their last four and have nothing but pride and bragging rights to play for as their star names who aren’t injured enjoy a weekend off ahead of their semi-final.

Lock Dan Tuohy will captain Ulster as Mark Anscombe makes 12 changes from last week’s defeat to Leinster at Ravenhill, giving a run-out to his fringe and academy players knowing that they can finish no higher than fourth and face an away trip to the club that finishes top of the league, currently Leinster.

“Mark Anscombe pulled me to one side on Monday and said that I was going to captain the team—I was delighted,” said Tuohy. “For me, I am just going to concentrate on my own game, get the lads behind me and hopefully we can put in a decent performance tomorrow night.”

Anscombe has named an entirely new backline with Craig Gilroy returning to full-back. David McIlwaine comes in on the right wing with Rory Scholes on the left.

Michael Allen and Academy Player of the Year, Stuart McCloskey, start in the midfield with James McKinney and Michael Heaney making up the half-back partnership.

The forwards features more experience as Callum Black starts at loosehead with Rob Herring at hooker and Andrew Warwick retaining his place on the tighthead.

Lewis Stevenson partners Tuohy in the engine room, with Mike McComish and Sean Doyle making up the back row with experienced former Munsterman Nick Williams at number 8.