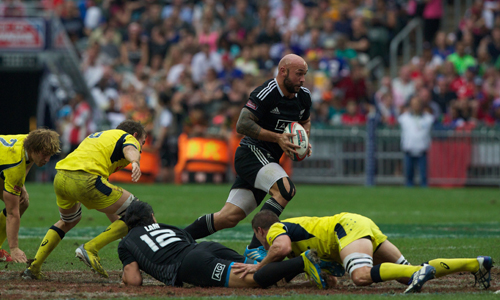 All Blacks 7s captain DJ Forbes is hoping day one of the Glasgow 7s will be a game-changer in the race for the HSBC Sevens World Series title.

Reigning champions New Zealand return to Scotstoun Stadium looking to avenge last year’s 28-21 Cup final defeat by South Africa and increase their seven-point lead over the Blitzbokke ahead of the final round in London next week.

Fate would have it that last year’s finalists in Glasgow have ended up in the same pool, along with Samoa—who won the Cup in Edinburgh four years ago—which presents a mouth-watering prospect on the opening day.

“We’ve had pretty tough pools all year round, but having us and South Africa, the leading two teams going for the World Series [in the same pool], could potentially change the game either way,” said Forbes, who was named player of the round last time out in Hong Kong.

“We have to be on our toes and I’m sure they’re well aware of the chances of keeping them in the mix [for the title], so we don’t want to get too far ahead of ourselves, but if we can do the business on day one this could be a game-changer for the World Series.”

This year will be the eighth year a round of the World Series has been held in Scotland and New Zealand, South Africa and Samoa have won six of the seven Cup finals between them, with Fiji defeating South Africa 20-19 at Murrayfield in 2009.

Despite the southern hemisphere dominance, the All Blacks’ most-capped Sevens player is well aware that everyone is out to defeat them and writes off nobody, even minnows Portugal, who complete their Glasgow 7s pool, who lost 17-10 to Kenya in the Shield final last time out.

“For us, we still want to make sure we put our best foot forward,” he added. “The Series isn’t won yet so we know that everybody is going to be out to spoil the party.

“As far as we’re concerned, we’ll just focus on our pool games, like we have for many years now. Every game is a final for us and hopefully we’ll put ourselves in with a chance for a cup challenge.”

After a disappointing fourth-place finish in Tokyo saw the All Blacks slip to second in the World Series, Forbes led his colleagues to a great comeback in the rainstorm in Hong Kong, and the 31-year-old admits it was a huge result.

“Getting that win in Hong Kong was massive for us in the World Series“, he said.

“What people don’t realise is that we got some positives out of that Tokyo loss. We got to give our young boys a chance in that third-place play-off, so they had a taste of finals footy, and we had a week to regroup and put things back to how they should be.”

Forbes concedes that—as the elder statesman of the squad—there is more pressure on him to keep his place with younger, fitter players putting their hands up for selection at their training camps in Mount Maunganui in the Bay of Plenty.

The call-up for the final two rounds of the World Series of Canterbury wing Adam Whitelock, regarded as one of the fittest players at the Crusaders, highlights the sort of talent that head coach Tietjens has available to him ahead of July’s Commonwealth Games and the 2016 Olympics in Rio.

“It’s always the case,” Forbes added. “I’m running around with a few schoolboys now. It’s a little bit intimidating, but it’s part of professional rugby and we know in New Zealand we grow up wanting to play rugby and a lot of us are living our dream so to speak.

“As far as I’m concerned, I’ve had a real good run. It’s up to God how long I play this game, but I’m definitely enjoying my footy and every player that comes in is a new challenge and keeps the blood warm to keep at it.

“I’m really pretty happy to be playing here again. Knowing Sevens started in Melrose in Scotland and is at the start of something big now it’s back in the Olympics, it’s exciting to come back here to where it started.

“That was the main reason me and Tietj had a talk about me putting 15s on the backburner for a bit to save whatever I have left in my body to commit to Sevens and so far so good.

“I’ve had the chance to really freshen up and focus on Sevens and the body’s been going good but, in saying that, two years is a little while away but in terms of the transition I’ll be around to help who I can when I can to give us a chance at an Olympic gold medal.”