Sevens World Series: Colin Gregor hopes Scotland can make the most of their home advantage 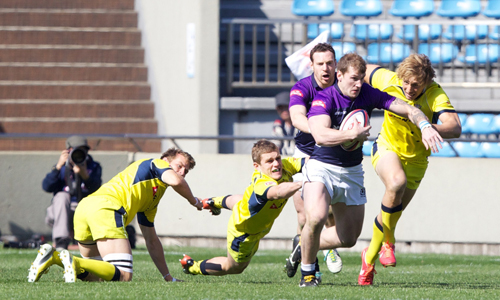 Colin Gregor is hoping Scotland 7s can use home advantage to kick on after a frustrating season in the HSBC Sevens World Series.

The Scotland captain admits to being frustrated at their form which sees them 12th in the World Series with two rounds to go, four places and 16 points off their target of a top eight place.

We realise that each tournament of the World Series is massively important and this one, for us, probably more so because it’s at home

“It’s been a frustrating season,” Gregor said. “We’ve created opportunities and put ourselves in positions and then for a variety of different reasons we’ve not kicked on as we would have liked.

“We’ve lost games that we would like to have won, we’ve let teams off the hook, so it’s been frustrating is the main thing—we’d play well for a half or parts of games and the lapses have been expensive, so we’ve been working on trying to eliminate them and making sure we work on the strengths of our game and keep building them.”

Scotland may have lifted the Bowl in the last round of the World Series in Hong Kong, beating three teams ranked above them en route to the win over France.

But Gregor is not getting carried away despite the excitement of the rugby sevens event in the Commonwealth Games in Glasgow in July and the Scotland squad announcement due just 10 days after the London 7s ends next weekend.

“We’ve not found it too hard to focus on this,” he added. “We realise that each tournament of the World Series is massively important and this one, for us, probably more so because it’s at home.

“We’ve had the Commonwealth Games in the back of our minds throughout this season and it’s just around the corner now so I think it’s more about the excitement that it brings—the fact that we’re back in the UK; we’re in Glasgow.

“It’s a great chance for the team to put down a marker for where we are in the World Series, but also for individuals to stake a claim to be in the final 12 for the Commonwealth Games.”

Scotland head coach Stephen Gemmell has included Glasgow Warriors centre Richie Vernon and Edinburgh centre Nick de Luca in his squad for the Glasgow 7s and Gregor believes they both bring plenty to the party despite not having played on the Sevens circuit for some time.

“It’s a boost—they’re quality players and Scotland internationalists,” he said. “Nick will probably be a direct replacement for Mark Bennett, who was out in Hong Kong and went well there. He’s really good in attack—he’ll have a go and ask questions of defences.

“His strength is in defence and he brings a real physicality, very good reader of opposition attack and knows when to spot-hit guys, which will be a real strength for us.

“Richie, he’s just something a bit different—I mean that in a positive way. He’s a big, strong, powerful guy, but he’s really quick with it. He’s got a good skillset, a good set of feet on him for making breaks and a real strength is his offloading game as well, so hopefully we can play off that at the weekend.”

Scotland begin this weekend’s round of the World Series in Pool D, but only Australia, currently fifth, are ranked above them with USA just seven points behind in 13th. The expectation is that Scotland are certain to qualify for the Cup quarter-finals on Sunday, but Gregor believes that they have to avoid complacency.

“As Stevie says, we target top eight,” he added.

“The old cliche of taking it a game at a time and all that, but especially with our group of Australia, USA and Spain we’ve got to concentrate on them individually, put in the performances I talked about earlier and make sure we’re in the mix come Sunday.

“From there, come Saturday night once we’ve achieved that target we reassess and set our goals from there.”

Adam Gemili looking for more over 100m this season