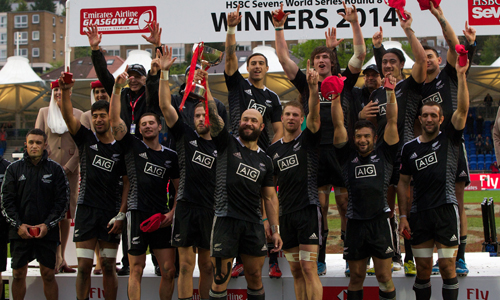 New Zealand edged closer to the defence of their HSBC Sevens World Series as they survived a weekend of upsets at the Emirates Airline Glasgow Sevens.

Gordon Tietjens’ side cruised to another Cup title with eight tries in a crushing 54-7 win over Canada at Scotstoun Stadium to reclaim their title lost to South Africa in a thriller a year ago.

It was a ruthless display from the All Blacks as they converted on every visit to Canada’s 22. Scott Curry and Ben Lam both ran in twice with one each for Bryce Heem, Adam Whitelock, Akira Ioane and Gillies Kaka, who also added 12 conversion points. Curry also added a conversion.

Harry Jones ran in for Canada, but it was barely consolation.

“It’s always special, just even wearing a black jersey; definitely a privilege to be amongst the boys and here’s always been special for me,” said All Blacks captain DJ Forbes.

“I played my 50th two years ago and here 65 caps now. It’s a great place to play rugby. Scotland started [Sevens] in Melrose and it’s a good occasion.

“We probably had the hard side of the draw, we had to do it the hard way with South Africa in our pool and Fiji in the semi, Canada in the final. All those teams love contact so a couple of bumps and bruises, there’s still a week to go so hopefully I’ve got a bit more in me.”

The result extends the All Blacks’ World Series lead over South Africa to 19 points ahead of next weekend’s final round at Twickenham and, only barring major miracles, rugby’s most successful Sevens nation will add another World Series to their impressive honours roll ahead of this summer’s Commonwealth Games in Glasgow where they go in search of a fifth gold medal from five tournaments.

“You’d like to think we’ve pretty much done the job,” Forbes added. “Anything can happen. You would think that we’ve got a reason to celebrate, but there’s still one more week to go. We’ll enjoy tonight and appreciate what we’ve achieved.

“As far as we’re concerned, one game at a time. We’ve hopefully still got six more games to go.”

Hosts Scotland, again boosted by a number of professional 15s players including Richie Vernon and Nick de Luca, produced their best performance since 2009 to reach the Cup semi-finals as they stunned South Africa 12-10 in their first match of the day, but hopes of a first World Series final was snatched away as Canada won 10-7 in the semis.

It didn’t get much better for Scotland in the third-place play-off as Fiji hit back after defeat to New Zealand to win 17-10, but Scotland’s 15 points for fourth place elevates them to 10th in the 2013/14 standings with a top eight finish still an outside possibility.

England bounced back from their narrow Cup quarter-final defeat to Fiji to win the Plate final with a convincing 26-5 win over Scotland Sevens favourites Kenya.

France won the Bowl for the second time in three attempts this year with a 20-14 win over Argentina. It was Les Bleus second visit to the final in as many rounds after losing out to Scotland in Hong Kong.

Wales managed to salvage some pride from a dismal weekend in Glasgow with a 29-12 win over Japan in the Shield Final. Despite the silverware, the win brings just three points for Gareth Williams’ squad ahead of next week’s season finale at Twickenham.

The recently-appointed head coach was disappointed with his side’s performance after lifting the Bowl in Tokyo last month the week before reaching the semi-finals of the Plate competition, where they pushed South Africa hard as they went down 19-14.