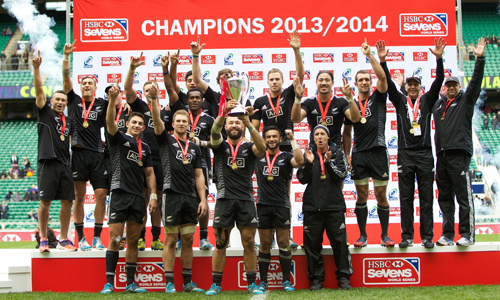 New Zealand secured their 12th Sevens World Series title on Saturday by reaching the Cup quarter-finals and won their third consecutive round at Twickenham.

The reigning champions were handed the biggest of scares in a tense Cup final as Australia stormed into a 21-0 lead before the All Blacks produced a superb comeback with eight tries, with Scott Curry, Ben Lam and Gillies Kaka scoring two each.

Australia refused to give in and picked up a consolation try in the final minute of Michael O’Connor’s final tournament, but as they looked to close the gap with the hooter already sounded, New Zealand stole the ball back again as Gillies Kaka took his points tally in the 52-33 win to 22—the most points scored in a World Series final.

“We had to do it the hard way,” said All Blacks head coach Sir Gordon Tietjens. “All credit to them—to come back from 21-0 down and make it 21-21 at half time.

“To bounce out like we did at the finish and score the last try was really pleasing.”

In the Plate final, Stormers-bound Blitzbokke star Seabelo Senatla scored his second hat-trick of the day as he became only the third player to score 13 tries in a tournament—the first time the feat had been achieved since the 2005 Paris Sevens.

For South Africa, it meant a 38-7 win over Kenya to secure second place in the World Series ahead of Fiji, who finished fourth after going down to England in the third-place match.

Dream Team player Phil Mack secured the Bowl at the London Sevens as Geraint John’s Canada defeated Argentina 24-14, a week after they were demolished in the Cup final by the All Blacks in Glasgow.

The result sees the Canadians finish an impressive sixth in the World Series standings behind New Zealand, South Africa, Fiji, England and Australia.

“I think if you’d have offered us at the start of the season, we wouldn’t have thought this would happen,” said John. “Even this weekend we have only lost once, the first game yesterday.

“So really proud of all the players, the staff and everyone back home. To finish sixth in the Series is an unbelievable achievement for everyone.”
Zack Test and Mike Palefau bagged a brace each in the Shield final as the USA defeated Japan 36-12.