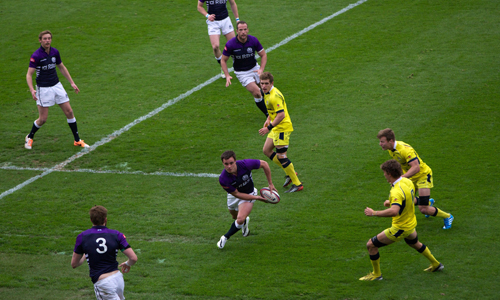 Scotland stormed into the Cup quarter-finals for the first time since Dubai with three convincing wins on day one of the Glasgow 7s at Scotstoun Stadium.

Buoyed by a noisy crowd of over 11,000 in Glasgow’s west end, Scotland kicked off their Glasgow 7s campaign with a 19-7 win over Australia—ranked seven places above them in the current HSBC Sevens World Series standings.

The match started badly for the Aussies as a botched kick-off allowed Scotland to build pressure in their 22, but Michael O’Connor’s side stood up to the challenge before turning over the ball and clearing up to half-way.

From the resulting line-out, Australia stole the ball and Con Foley sent through Cameron Clark on the outside of Scott Riddell to go under the posts.

Riddell made up for his poor defending with two minutes of the first half remaining as he broke through the Australian defence after a good offload by Scott Wight.

Scotland captain Colin Gregor converted to tie the game at 7-7, but he wasn’t finished there and with 35 seconds of the half remaining Gregor dotted down for Scotland’s second after good work from Glasgow Warriors’ James Eddie. The conversion gave the hosts a 14-7 lead at the break.

Lee Jones capped the win with his 13th try in the World Series this year, Gregor missed the conversion.

Much had been expected of the USA 7s team, despite speed merchant Carlin Isles—now based at Scotstoun with the Warriors—not selected in the squad by player/coach Matt Hawkins.

It could be a decision he lives to regret has the Americans slumped to three defeats, including a 17-7 loss to relegated Spain in their opening match.

Later in the day, Scotland wasted little time in compounding problems for the USA, going ahead after just 50 seconds as Jones finished off in the corner from a pass out wide from Gregor, who continued to impress with ball in hand.

From there, it was relatively plain sailing for Gemmell’s side. Edinburgh centre Nick de Luca went over for Scotland’s second try—and his first Sevens try since 2006—as he ran on to a pass from Gregor, stepping off his right foot to go through the American defence with ease on the stroke of half-time. Gregor added the conversion to make it 14-0.

Jones scored his third try of the day two and a half minutes after the restart as he powered through the defence to score down the left, extending Scotland’s lead to 19-0 with Gregor missing the conversion.

Scotland then added a quick fourth as Chris Dean pounced on a loose ball to pick up and go over for another converted try taking the score to 26-0 and the crowd dreaming of silverware on day two.

Needing just a win to seal top spot in Pool D, Scotland were impressive again in the final match of the day as they routed Spain 33-12 with the players drafted in from the 15s game again making their presence felt.

Eddie finished off a well-worked team try which featured de Luca, Jones and Richie Vernon in the build-up, with Gregor adding the extras.

Eddie was through again less than 90 seconds later, and Vernon got in on the act with an intercepted try and 80-metre breakaway try under the posts before half-time. Gregor converting to make it 21-0.

De Luca started a great team move involving Wight and Riddell before Gregor went round the posts and converted his try to make it 28-0.

Inaki Villanueva and Javier Carrion got Spain on the scoreboard with consolation tries, but it was never going to be enough for the part-timers and the rout was completed when Scotland’s most-capped Sevens player Andrew Turnbull put on the after burners to run in a breakaway try.