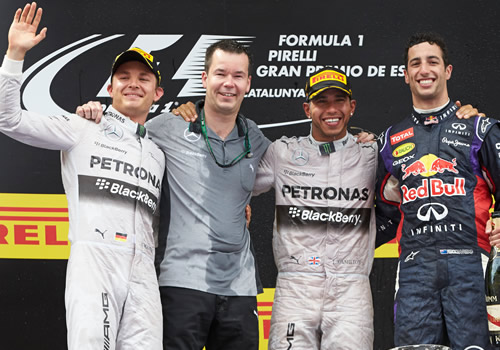 Lewis Hamilton insisted that the pressure of leading the world championship will not get to him after the Mercedes driver leapfrogged team-mate Nico Rosberg into the lead with a closely-fought victory at the Spanish Grand Prix.

Hamilton began on pole and led from start to finish to clinch a victory which moved him three points clear of his German team-mate in the drivers’ standings.

Pressure motivates me. Everyone has their breaking point but I have not found that

Red Bull’s Daniel Ricciardo was third, while defending world champion Sebastian Vettel did well to wrestle his way from 15th to finish fourth.

“It was far from a perfect race,” said Hamilton. “It was very difficult to focus when you are being pushed from behind but I had an oversteering car. It makes it so much harder to save the tyres. Nico Rosberg was catching me on the entry of corners today.

“I was watching a screen around the circuit and I could see how close he was to me! All I was thinking about at the final corner was not to lock up and not make mistakes and fortunately I did not.

“When you are under pressure, and you do not snap under pressure, that is when you know you have your stuff together. Pressure motivates me. Everyone has their breaking point but I have not found that.

“Already from last year it has been the happiest I have been but I am definitely at my happiest point.”

Asked if Hamilton’s impressive form could “break him mentally”, Rosberg replied: “Break me down mentally? That is good to know! I think he will struggle with that one. He has the momentum, there is no way round that and I have to try and break that down. Vice versa, in that regard, and the next opportunity is Monaco.

“The advantage we have is that we have done it before, when we were 14 and it is so funny because it is like deja vu all day long.”