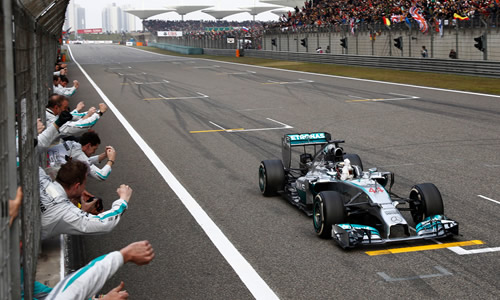 Mercedes’ Lewis Hamilton has never won in Barcelona and is hoping that this will be the year to break his duck at the Spanish Grand Prix.

Hamilton, currently second in the drivers’ championship, has had a near-perfect start to the season, winning three out of the four openings races.

“Barcelona is a great place to have the first European round on the calendar,” said Hamilton.

“I’ve never won in Barcelona but I’m in a good place right now and I’m hoping that this will be the year, although it’s clear who the fans’ favourite will be!” A reference to former team-mate and Spanish driver Fernando Alonso.”

The 2008 world champion continued: “It’s been good to have a bit of a break between races: for us as drivers and also for the team who have been working flat out for so many weeks.

“But after three great weekends in Malaysia, Bahrain and China I’m obviously keen to get on to the next one and continue that positive momentum into the next leg of the season.”

“The circuit is fantastic, our car has performed well so far and I’m really looking forward to a good race.”

Hamilton’s team-mate Nico Rosberg, who leads the drivers’ championship by four points, is confident that his knowledge of the Circuit de Barcelona-Catalunya will help him this race weekend.

“The Spanish Grand Prix is the first race of the season on European soil after four exciting races at various circuits overseas,” said Rosberg.

“This is where the next phase of the season begins and there is probably no other track in the world that I know as well as the Circuit de Barcelona-Catalunya.

“I also have some good memories of race weekends in Barcelona. Last year, for example, I started from pole position so I’m looking forward to going back there again and maybe repeating that particular feat.”

François Trinh-Duc in France squad for tour of Australia