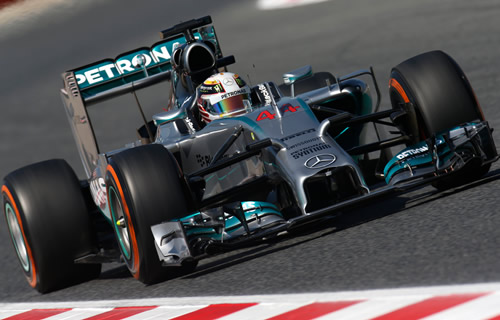 A brilliant lap in the final seconds gave him a fourth pole in five races, with the Briton 1.053 seconds quicker than Red Bull’s Daniel Ricciardo in third.

“It’s been a tough day,” Hamilton said. “Nico has been driving really well so I didn’t know whether I’d be able to get it. But right at the end I managed to get absolutely everything out of the car.

“Yesterday [Friday] I had such a great day and I was really happy with the car. Often when things are that good you don’t want to change much, but we changed a couple of small things here and there.

“Today the track went down [in pace] and the car was a real handful. Lots of oversteer, very inconsistent corner to corner and once you’re in qualifying there is nothing you can do.

“So that’s why we made some changes [during qualifying]. I was struggling to put a lap together but in the end I made it by the skin of my teeth. I tweaked the diff settings a little bit and drove the car a little bit differently.”

Rosberg said: “Very disappointed, I don’t enjoy coming second to Lewis. In the end it was a good lap from me, and Lewis just did a better job. That’s the way it is.

“It’s still all to play for tomorrow. It only takes a good start and I’m in the lead again.”