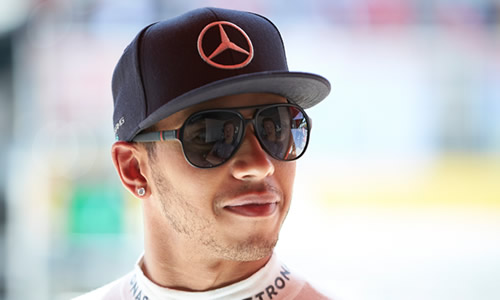 Lewis Hamilton set the pace in impressive fashion to top the timesheets ahead of Mercedes team-mate Nico Rosberg in second practice at the Spanish Grand Prix.

The Briton was 0.449 seconds faster than Rosberg and nearly a second quicker than Red Bull’s Daniel Ricciardo’s in third.

“It’s going really well,” said Hamilton. “It’s been a great day. It feels like a long break and to get back in the car and feel the positive steps made with the car.

“Big thank you to the team because the car’s feeling a lot better this weekend and today has been a smooth day.

“I have not had a Friday like this for a long time.”

Red Bull’s defending champion Sebastian Vettel was forced to sit out the session after an electrical fault to his car during first practice.

“We had a simple failure in one of the looms this morning, which caused a short and meant the car stopped,” said Vettel.

“We had to change the chassis loom, which is a big job so I wasn’t able to go out this afternoon. It’s a small failure, but a big consequence; there was nothing new on that part of the car, it was something new that happened in that area.

“Luckily it happened today (rather than tomorrow), but unfortunately we lost the chance to prepare for Sunday with two cars, so I have to rely on what Daniel did today and get into the rhythm straight away tomorrow.”

London 2016? ‘Olympics could return to capital in two years’