Twitter all aflutter as Roger Federer forgoes Madrid for a “miracle” 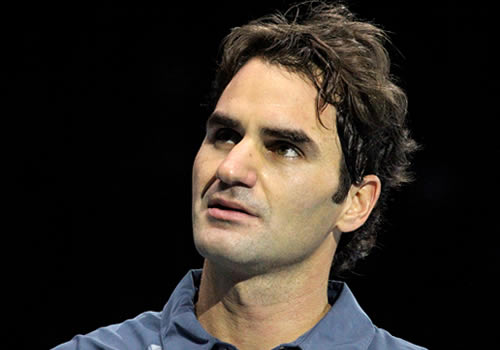 It’s a good thing Roger Federer has an equable temperament because, these days, he can hardly draw breath without making headlines.

We have to return to last Christmas Eve for the cause of the latest flurry of excitement, to the news that wife Mirka was expecting a sibling to their four-year-old twins. Immediately fans and paparazzi alike were checking calendars.

It was, as Federer’s well-oiled PR machine has been for many years, a smart and timely announcement, made just as the family retreated from the spotlight for the holiday. Twitter could flutter away, Facebook could bubble to its own rhythm, and the world’s media could report and move on.

When he emerged a few days later, ready to head to his first tournament of the season in Brisbane, he played his ace: the announcement of his tie-up with Stefan Edberg. It was the kind of news to divert headlines from fatherhood and channel them into Federer’s ambitions for 2014. And it was further stoked by the bigger, blacker racket he was now wielding.

Not that interest in his wife’s pregnancy flagged. Indeed Federer was questioned with predictable regularity in press conferences—three times in this correspondent’s hearing at Dubai alone—about the date of the birth. Every time the answer, usually accompanied by a wry smile, was the same. Well-tuned as he is to the pitfalls of saying too much, he made sure that silence was golden: “Only my wife knows that.”

I’ve played enough tennis matches. Missing a tournament or missing a match wouldn’t change anything for me

But in the absence of facts, conjecture filled the void, especially as Mirka made her usual courtside appearances through the months.

And in fairness, it became increasingly clear that this baby would arrive before Wimbledon rather than after, as the Federer twins had done. Eventually, in Monte Carlo—with Mirka a rare absentee—there was no denying the likelihood of a clay rather than a grass birthday.

He talked of returning home to recuperate from a hard spring: By the end of April, he had indeed put together more match wins than anyone on the main tour, including the Dubai title, three finals—two in Masters—and a semi run in the Australian Open.

“I’m going back home because I need to recuperate. I played with a lot of intensity during the past month… My body feels strange and I need to sleep.”

But that brought the counter-question: Would he still play Madrid, Rome and the French Open?

His actual reply was altogether more circumspect—proof, if it were needed, that he was right to blank the question earlier on.

“We’ve got to see what’s going to happen. There’s no date there [in the schedule] that is going to be for sure or not. So we’re just waiting.

“It’s a priority for me trying to be there, trying to support my wife. Of course, I’ve played enough tennis matches. Missing a tournament or missing a match wouldn’t change anything for me.”

And would that include a Grand Slam?

“Let’s talk about it when it would happen. At the moment we hope it’s not going to be that way. If it is, that’s what it is, you know.”

But Federer, alongside his skill at keeping media and paparazzi under control, is free and easy with his fans, and that has assured one of the widest networks of support on the tour, bolstered by 1.6 million Twitter followers and 14 million Facebook fans. He may have come late to Twitter but he has become one of its most proficient users: Selfies with witty handles, Q and A sessions that trend within minutes, and elaborate hashtags that quickly became common currency.

He is, it should be said, a willing partner in these interactions with fans: He signs anything put under his nose, poses with admirers for any mobile camera, shakes hands and shares jokes. To watch the ultimate pro in action after a practice session or a match is worth 20 minutes of any journalist’s time.

But these last few days have illustrated perfectly the downside of such openness.

Federer was scheduled to play in the Madrid Masters as the No4 seed, yet had not shown up in the Spanish capital to the usual fanfares from tournament and media. There was no photograph at the airport, no press conference at the Magic Box, no practice session—and gradually Twitter took flight.

It was reported that he had confirmed he was coming; Then that he would arrive the next day; Next that he had arrived the night before; Finally, that he was already in Madrid but practising at a private club. In fact it was clear to anyone who chose to look that he was unlikely to be in Spain if no-one had seen him and if he had not broken the silence himself.

And sure enough, with his first match scheduled less than a day hence and his opponent, Gilles Simon—with tongue firmly in his cheek—suggesting now was a good time to hurry the baby along, Federer did speak. As usual, it was via own mouthpiece, his Facebook entry saying, simply:

“I’ve decided to withdraw from Madrid to be with my wife Mirka during these next few exciting weeks for our family. I apologise to my fans and hope to be back in Madrid next year. I’ll be training near my home, and am excited to rejoin the Tour soon!”

But that simply stoked the speculation: Never mind Madrid, he would surely also miss Rome—and many went further, interpreting Federer’s ‘few weeks’ to include the French Open.

Never mind that he could be ‘training near his home’ in order to be prepared for Roland Garros… for another Tweet was about to set the Federer name trending worldwide, and as always, it came direct from the Twittering fingers of the man himself: “Mirka and I are so incredibly happy to share that Leo and Lenny were born this evening! #TwinsAgain #Miracle”

Just as when his first children were born, he had given not a clue to either date or arrival or number of babies—and demonstrated the potency of social media in the right hands.

The day began with Twitter at its worst, with Chinese whispers flickering through computer screens that were eventually quashed with one simple statement on Facebook. And hours of speculation over where and when Federer might next play was trumped by Twitter used at its very best: One announcement, one emotive tag—and one certainty.

That for a certain happy family in Switzerland, the work is just beginning, and only time—not Twitter—will decide what Federer does next.