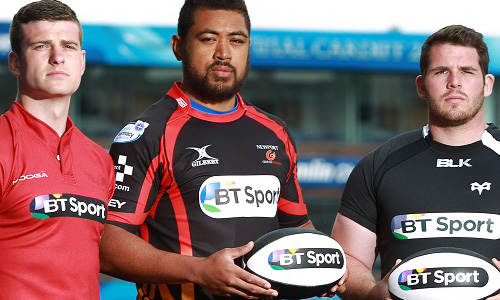 The “multi-million pound deal”, for three years with an option for a further two, will also see the other three Welsh regions carry the broadcaster’s logo on their shirts in a similar arrangement to Pro12 rivals Glasgow Warriors and Edinburgh.

“It’s a time to celebrate the strides that the Welsh regions are making to take the game forward in Wales with real unity, a common purpose, shared philosophy and commitment to ensuring that our businesses are sustainable,” said Regional Rugby Wales acting chief executive Mark Davies.

“This is a clear vote of confidence in the Welsh regions and we are delighted to be working alongside BT, a successful global brand that can see the real value in investing significantly in our regional businesses, our 200 professional players and the rugby development structures we have in place.

“It’s great to have positive news for regional rugby as we all now look forward to a new season, with a new European competition and greater challenges in our Pro12 domestic league.”

More often associated with football grounds and multi-sport facilities, the selling of naming rights is becoming more common in rugby union across the UK and Ireland in a bid to bring more revenue into the game.

The stadium at the heart of the Barnet Copthall leisure complex in Hendon, north London—home of this year’s Premiership and Heineken Cup finalists Saracens—became Allianz Park in a six-year £8m deal while the Salford City Stadium—home of Sale Sharks and rugby league’s Salford Red Devils—is currently the AJ Bell Stadium in a nine-year deal.

But it’s not just Aviva Premiership clubs getting in on the act.

Famously, the Irish Rugby Football Union and Football Association of Ireland secured a 10-year deal with insurance firm Aviva in 2009 for a reported €44 million following the rebuild of Lansdowne Road.

Pro12 giants Munster also recently announced that their second stadium and commercial home in Cork will become the Irish Independent Park in a 10-year deal with the Independent News & Media group.

There is also further consideration being given to rebrand their Thomond Park home in Limerick, despite an uproar from fans the last time it was on the cards staving off any name change.

Having secured the rights to show the Aviva Premiership and French Top14, BT Sport have been aggressive in snapping up sponsorship deals with clubs in the Pro12—with 33 matches set to be shown on rival Sky Sports from next season meaning their brand will feature prominently—and their reach now extends to seven of the 12 clubs in the competition, which does not have a title sponsor for next season.

“We are delighted to have reached an agreement with the four regions and there are exciting times ahead as we embark on our new relationship with Welsh rugby,” said BT’s Wales director, Ann Beynon.

“Rugby is at the heart of BT Sport—we’re excited to support regional rugby and its distinct and dynamic culture, with all it stands for in terms of strength, determination, daring, passion and skill.

“We respect and want to support the passion of the very knowledgeable Welsh rugby communities and applaud the positive and progressive work being done by Regional Rugby Wales (RRW) and those overseeing and working within the four Welsh Regions.”

The company is also in negotiations with the Scottish Rugby Union in a deal that could see their national stadium—and principal home of Pro12 club Edinburgh—rebranded as BT Sport Murrayfield in a reported £20 million deal for up to seven years.