Argentina v Ireland: Simon Zebo wants to secure his starting spot ahead of the second Test against the Pumas 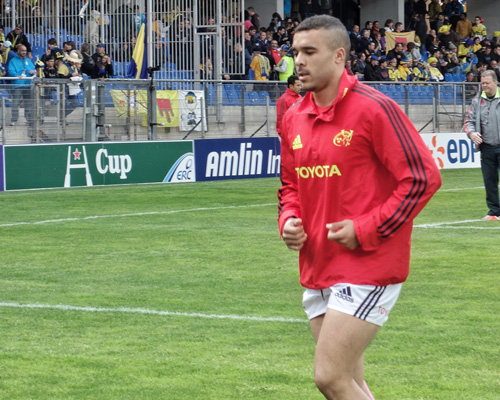 Simon Zebo hopes to hold on to his Ireland jersey after winning his seventh cap against Argentina last weekend.

The 24-year old Munster winger returned to the international fold for the 29-17 win in Resistencia after missing out on Ireland’s Six Nations championship win earlier this year as he returned from an ankle injury.

“It’s always a pleasure and an honour to get to wear the green jersey and I was just grateful that I had got the chance to get back and play,” Zebo said.

“It’s been a while through injury and other things that I’ve been out. To come back and get in the shirt and get a win as well has been special.”

Ireland head coach Joe Schmidt is not short of contenders to line up on the wings with Leinster trio Fergus McFadden, Luke Fitzgerald and Dave Kearney and Ulster duo Tommy Bowe and Andrew Trimble providing plenty of competition for Zebo.

“It’s always going to be tough with the competition we have,” he added. “There are some world-class operators in the back-three department for us and we’re blessed to have that.

“Competition drives players on to perform even better so it’s better for the squad as a whole.

“Hopefully the strong competition drives me on and drives all our other players on, and come the World Cup and the Six Nations we’ll have a very, very strong squad, plenty of strength in depth to operate with.”

Despite not being among the try scorers, unlike his wing partner Trimble, Zebo admits he was rusty but happy with his involvement as Ireland finally secured their first Test win in Argentina and his attentions have already turned to Saturday’s second Test in Tucumán.

“It’s been a couple of weeks since I’ve last played and I was a little rusty in a couple of areas but generally happy with the few touches I had,” he said.

“The most important thing was to get the win and hopefully now we can do that again against Argentina, but we know it will be very tough. We are looking forward to and it should be good.”