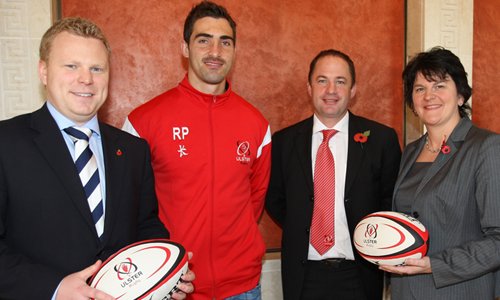 Gloucester Rugby have confirmed that Ulster’s David Humphreys will become their new director of rugby ahead of the new Aviva Premiership season.

The 42-year-old former Ulster and Ireland outside-half—who captained his province to the 1999 Heineken Cup title—will succeed Nigel Davies, sacked after a disappointing season saw the Cherry and Whites finish ninth.

It is, I believe, the right move for me at this stage of my career

Humphreys’ appointment ends a global search for a new figurehead to lead a new era at Kingsholm as they look to become Premiership contenders and return to the top tier of European rugby.

“This appointment is so key for the long term success of the club, and I’m absolutely thrilled that David is joining Gloucester Rugby,” said CEO Stephen Vaughan.

“We have received applications from all over the world and [chairman] Ryan Walkinshaw and myself spoke to a large number of high-calibre individuals. However, once David entered the frame and we discussed our vision and what he could bring to the project, we knew we had our man.”

The qualified solicitor made 162 appearances for Ulster, winning 72 senior international caps before hanging up his boots in 2008 and becoming operations director.

In 2010, he became the province’s director of rugby and oversaw a transformation that saw the club challenge at business end of the RaboDirect Pro12 and Heineken Cup.

“This was a really difficult decision for me personally but having received a direct approach from Gloucester, I have now chosen to accept an offer to become their director of rugby,” said Humphreys. “It is, I believe, the right move for me at this stage of my career.

“I would like to thank the supporters and all those involved in Ulster Rugby over more than two decades who have lent me support, encouragement and wisdom.”

Humphreys will take up his position at Kingsholm on a date to be mutually agreed between the two clubs.