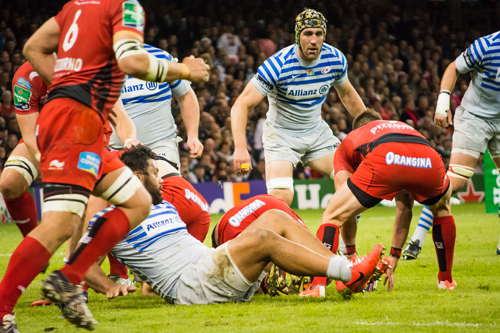 Kelly Brown returns to the Scotland team against Canada in Toronto on Saturday as one of four changes from Sunday’s 24-6 win over the USA.

The Saracens flanker lines up on the openside, the position he was switched to during Scott Johnson’s reign, to partner Al Strokosch and Johnnie Beattie in the back row.

In the second row, Edinburgh’s Grant Gilchrist comes in for the injured Jim Hamilton to partner Castres lock Richie Gray and will take over the lineout calling.

Scotland head coach Vern Cotter has made just one enforced change to the backline with Glasgow Warriors centre Peter Horne flying out for his first start in place of Duncan Taylor at 12 to partner club team-mate Sean Lamont ahead of his involvement on the second half of the Scotland tour which begins next week.

The New Zealander has kept faith with a back three that yielded two of the three tries against the USA as Stuart Hogg continues at full-back with Glasgow Warriors team-mate Sean Maitland on the right wing and Edinburgh’s Tim Visser on the left.

Glasgow Warriors’ outside-half Finn Russell gets another chance to impress after an assured debut in Houston with Gloucester’s Greig Laidaw offering plenty of experience from scrum-half and he again takes the captaincy despite the return of Brown, with Cotter hoping it will help with consistency.

Canada head coach Kieran Crowley has made three changes to the team that squandered a 25-9 lead against Japan in the Pacific Nations Cup as they lost 34-25.

London Irish flanker Jebb Sinclair has recovered from a leg strain to return for his first start of the year for Canada, with Adam Kleeberger dropping out of the 23, and partners Canada 7s star John Moonlight with captain and Ospreys’ versatile forward Tyler Ardron starting at number 8.

Canada 7s livewire Phil Mack is promoted from the bench to start at scrum-half alongside outside-half Harry Jones.

Former Glasgow Warriors winger Taylor Paris keeps his place on the left wing with Ospreys flanker Jeff Hassler continuing on the right wing and James Pritchard at full-back with Nick Blevins and Ciaran Hearn also continuing their partnership in midfield.